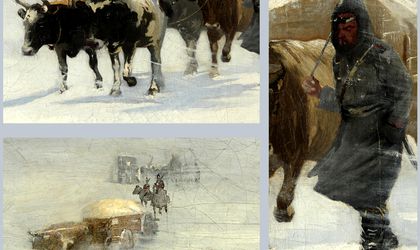 The National Museum of Romanian History (MNIR) will display Stefan Luchian’s Convoi la Plevna (Plevna Convoy) for the first time after it was restituted during the “Exhibit of the Month” micro-exhibition, according to a press release from MNIR.

The Convoi la Plevna painting underwent a complex process of conservation-restitution, following which it was “brought back to life” and returned to the public, says MNIR. The restitution process, realized by Romeo Gheorghita and Sorina Gheorghita, was complicated by the fact that the work had undergone previous interventions and the assessment made before restitution revealed the existent of relatively significant degradation and losses. The restitution process aimed to recover the authenticity of the work’s image.

Luchian, the so-called “plastic poet of flowers”, influenced Romanian painting during the first two decades of the twentieth century and was considered to be “one of the most brilliant followers” of Nicolae Grigorescu and Ion Andreescu, so-called “parents” of Romanian painting, according to the MNIR press release.

The subject of the Convoi la Plevna painting has to do with the Romanian Independence War (1877-1878) and was created at the beginning of the artist’s career. It is possible that the painting was made to prepare a larger work, of the same name, that would have been exposed at a Parisian salon in 1892, says MNIR.