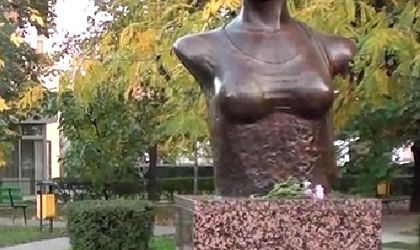 A sculpture erected to commemorate a former first lady of Romania, Arethia Tatarescu, must be altered because it is “too sexy”, the country’s Ministry of Culture has said.

The bronze bust of Arethia Tatarescu which was situated in Targu Jiu, Gorj County, is deemed aesthetically inaccurate because the breasts are too large, the Huffington Post reported, citing Central European News.

Although the statue was unveiled in Ms Tatarescu’s hometown last October and cost more than EUR 4,000, it should be removed and modified by the local artist Paul Popescu, said Radu Boroianu, a deputy minister in the Romanian Ministry of Culture, quoted by the Huffington Post.

The journalists contacted the artist, Paul Popescu, who refused the request and said that “in artwork breast size is a matter of taste”. His argument was that “Minister Boroianu personally finds it too sexy because the breasts are too large. I don’t think that the breasts are too small, and I don’t think that they are too large. I think they are just right.”