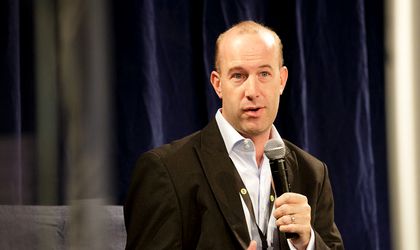 Michael Levit is managing partner of Founders Den exclusive co-working space in San Francisco, as well as co-founder of Spigot.com, a company with Romanian employees. Prior to that, he was co-founder of the Vendio e-commerce platform, which was taken over by Chinese giant Alibaba. His professional and personal experiences are closely knit together. Levit was a speaker at the How to Web regional technology event in Bucharest.

We have some hubs for entrepreneurs in Romania. What makes Founders Den different?

About three years ago, we had just sold our company to Alibaba. I was leaving and wanted to start a new company – in fact we were buying some of the things out of our old company from Ali Baba. So we got this new business, myself and the co-founder, who is the former CEO of Vendio. Vendio was a big business; it was doing USD 1.4 billion in sales.

The problem I had was this: there I was starting my fourth business, and while I was doing it, I also had my first child. I wanted to be around other people who started businesses. One of my friends, whose wife was pregnant as well, had a similar idea, so eventually four of us thought: let’s start an office. Originally we were thinking: this will be something for 10-20 people, and we looked around for space. This was some years ago and there weren’t great co-working options. There were some, but mostly for people who were 22 and wanted to stay up all night and drink Red Bull. But for the four of us, who were in our late thirties, early forties, that wasn’t the right fit. That’s how Founders Den was born. We found this one space which was actually divided. One area is a working space and the other is dedicated to networking.

How many entrepreneurs work from Founders Den?

We have about 50 people at Founders Den working at any given time. We do six-month leases. We lease them the desk, the chair, access to a printer and access to a series of events. For us, it’s all about creating a community.

What are your plans for Spigot?

With Spigot, we are mid-stage and we are coming up to 35 employees now. We have tens of millions of USD in revenue, so we are quite profitable. Spigot is now about three years old, the same as Founders Den. We did one big acquisition at about the same time I had my second child. My business partner jokes that I need to have more children because great things happen for us then!

Tell me more about how the acquisition process went…

Normally what you do is go to a venture capitalist and say, “Here’s our business, here’s our plan, can you give us money in exchange for stock?” But we had a great business and we didn’t want to give up stock. So, rather than pitching for venture capital, we pitched for debt. We asked banks for a loan – a very different model, not typical in Silicon Valley. We had to pitch to a lot of banks, but ultimately Spigot is very profitable and the company we were buying was also. We bought a company called Vuze, officially called Azureus. We took a loan where we had to repay the money over three years. I’m proud to say that, as of last month, the money is repaid – we paid it off in 13 months!

How many employees do you have at Spigot?

Right now we have between 30 and 35, most of whom are in Bucharest. From a formal perspective, we are a company based in Nevada. But from a logical perspective, we are a Romanian company which happens to have some functions in the US. We started off saying: we’ll hire some developers in Romania. We had a connection with a CTO- our former director of engineering from Vendio, whom we brought in as CTO for Spigot- who then hired a variety of people. But we still defined our product in the US. We had a head of product and we decided to hire another product person to work for our head of product in the US. We hired him from Yahoo, but then Yahoo offered him a double promotion to go back. So we thought we’d have to hire someone else in the US to replace him. Meanwhile, while we were waiting, the lady we had hired in Romania was doing the job. What we found was that with the interaction of the product person sitting next to the developer, we actually got much better efficiency. We said, “Why would we want to hire someone in the US when it’s working better in Romania?” We are really fortunate; our head of product went to school in the US but was born in Romania and returned home to Romania.  That’s what’s beautiful about Romania, this blend of practicality while still being cost-efficient. The team in Romania is made up of 25 people in total.