Meat-ing a need: local restaurant scene gets beefed up 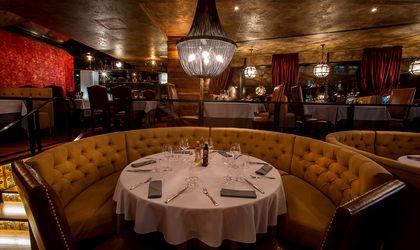 Bucharest’s carnivores seem to have discovered an appetite for beef in a variety of forms, promoting local restaurateurs to invest in dedicated venues, which five years ago were considered a niche. Last month, Aviatorilor saw the opening The Beef Club, a fine dining restaurant, whose owner, Dragos Panait, has invested over EUR 500,000 in decor and equipment. The restaurant has 76 covers and the owner expects 150 diners per day, with an average bill of RON 180. Last year, Operative Steakhouse Group, the company that runs both Red Angus Steakhouse and now The Beef Club, had a turnover of EUR 638,000, and this year the firm expects a hike of up to 45 percent.

“After five years in the horeca industry, the creation of a new business line was a natural step. We believed that we could achieve another level, a top product kind of place, different from Red Angus Steakhouse in the Old City Center where customers experience casual dining,” said Panait.

A menu highlight is the Wagyu beef, which has up to 1/3 more fatty acids (such as Omega 3 and Omega 6) than other species, and is more tender. Customers can sample it in Wagyu Australian Rib-Eye for RON 320, among many other beef choices.

Diners whose palate favors the piscatorial can select lobsters directly from the restaurant’s aquarium for prices from RON 290 to RON 340 for a Lobster Thérmidor, an oven-baked Lobster with Béchamel Cheese Sauce.

Vegetarians are not forgotten, with dishes like Celery Mushroom Pot Pie (RON 26) or Veggie Burger topped with steamed Asparagus and Tzatziki Sauce (RON 25). Soups, salads, desserts and a special selection of wines pour les connoisseurs round out the menu.