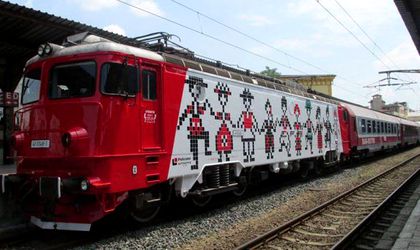 The so called “Martisor” train has started its travels today, on the route from Bucharest to Constanta, Agerpres informs. The trainset comprises newly upgraded cars, finished at the beginning of the year, and is lead by the “Hora” locomotive.

CFR Calatori, the public railway transport company, intends to revamp up to 30 such wagons from company funds, amounting to RON 42 million.

Both Martisor and Hora are old Romanian traditions, the first usually encompasses the meaning of nature’s rebirth during springtime and takes place on March 1, while the second one is a traditional dance which is most often associated with unity.

Romania, along with Bulgaria, the former Yugoslav Republic of Macedonia and the Republic of Moldova have recently nominated cultural practices associated to the first of March for inscription on UNESCO’s Representative List of the Intangible Cultural Heritage of Humanity.

While the nominations were sent back to the three countries for completion, the committee in charge of relations with UNESCO expects for the process to go through and for the countries to obtain “the recognition and preservation of this spring beginning custom handed down from the Antiquity to make and wear a martisor, twisted red and white threads, as a charm,” a press statement by the  Romanian Parliament’s Joint Standing Committee on the relation with UNESCO read.