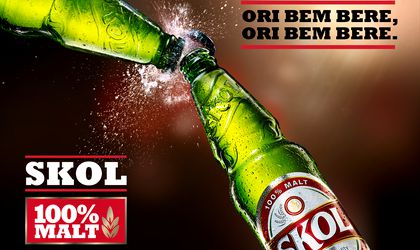 The new Skol campaign was launched on the 4th of July with a TV spot that runs on the main 8 tv stations, the communication mix being completed by radio, tranzit, digital, OOH and trade materiales, all creative executions made by Lowe.

“We wanted a strong vision, but that expressed the nature of the Skol brand and the promises it makes in a very relevant and honest way. We found it the campaign proposed by Lowe, that has convinced us by a memorable creative concept and that has demonstrated that understands in a very profound way the Skol consumers, just like we have discovered in our research phases. From the inspired gesture of opening the bottles and until the headline that will definitely enter the urban language, the new Skol communication is fresh, honest and speaks directly in the tongue and in the spirit of our consumers,” said Paul Markovits, Vicepresident Marketing URBB.

“X: We make things happen or we leave it for tomorrow? Y: But, wouldn’t it be better if we drink a beer? That’s how it sounded a discussion between us during the pitch. And from here to “Either we drink bere or….we drink bere” it was just a small step and… more beers. We liked it a lot and so we presented it in the pitch as well. And I think we took the right decision. If not, it would have been somebody else saying it. The way it caught us I am sure it would caught more people, because the simple words are the best. Especially when they come with your favorite beer – Skol,” added Vasile Alboiu, Chief Creative Officer, Grupul Lowe.

The tv spot brings out the quality of the beer, saying that “a quality beer opens the way you want it too”. The concept behind the campaign came following an intense creative and strategic process, strongly sustained by the research component. You can see it here: http://bit.ly/1VIwuLc.