Love is a legal battlefield: Marriage and divorce in Romania 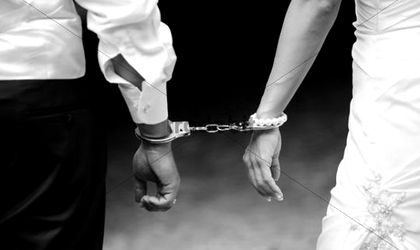 On Valentine’s Day, love is meant to be taken seriously, and nobody takes it more seriously than the Government. Under the New Civil Code which came into effect on October 1, 2011, the State insured a new legal framework for family relations. The New Civil Code incorporated the Family Code and provided a modern regulation, adapted  to social realities.

Marriage is still a revered institution in Romania, while divorce carries a social stigma. According to the 2011 Census data, the current rate of marriages is 5.40 for every 1,000 inhabitants. While this is considerably lower than the marriage rate from 2007, when it was a high 9 marriages / 1,000 inhabitants, it’s still higher than the European average of 4.4 marriages. It’s certainly the highest marriage rate in the region, neither Hungarians (3.55 marriages) or Bulgarians (3.22 marriages) being in any rush to get married.

The Government of Romania legally recognizes only civil marriage ceremonies that are performed in the City Hall or the Sector Office in the area where the Romanian citizen resides. The following documents are needed by the Vital Statistics Office of the Mayor’s Office to authorize marriages:
– Certified copies of birth certificates and identity cards;
– Prenuptial certificates (health certificates);
– If one or both parties have been previously involved in marriages, they must supply a document that attests their status as a divorcee;
– Marriage statement.

The paperwork is dropped off at the Vital Statistics Office 10 days prior to the marriage procedure. Additionally, if one of the individuals wishing to get married is a foreigner, he or she also needs to supply:
– a notarized translation in Romanian of their birth certificate;
– a notarized statement (affidavit) that the foreigner citizen is free to marry, obtained at the foreigner’s Embassy in Romania.

Both of these documents need to be provided by a Romanian notary.

According to Art. 38 Romanian Family Code, there are two ways in ending a marriage through divorce:
– friendly divorce by mutual agreement. It is the most advisable way to solve the divorce, and usually can be solved at the notary’s office. Only possible if the divorcing couple is childless.
– justified divorce (both parties guilt or defendant’s guilt).

As for the support the spouses owe to each other, Article 41 in the Family Code specifies the following:
“Art. 41
(1) Until the dissolution of the marriage in the conditions stipulated by Article 39, the spouses owe each other a spousal support.
(2) The divorced husband is entitled to spousal support if he is in need because of a labour incapacity occurred before or during marriage; he is also entitled to support when the incapacity occurs within one year as from the dissolution of the marriage, but only if this is due to circumstances related to the marriage.
(3) The spousal support due according to the provisions of par. 2 can be established to an amount up to one third of the net income of the spouse obliged to payment, depending on the needs of the spouse asking for support and the means of the one who is to pay it. This amount, together with the child support, cannot exceed half of the net income of the paying spouse.
(4) When the divorce is pronounced due to the fault of one of the spouses, the latter shall only benefit from the provisions of par. 2 and 3 for one year as from the dissolution of the marriage.
(5) In all events, the right to spousal support ceases in case of remarriage of the entitled spouse.”

A novelty introduced by the New Civil Code in the ﬁeld of family relations is engagement. This new legal institution is regulated in articles 266-270 NCC, representing the mutual promise of two individuals to marry.

Breaking the engagement results in the obligation to return the engagement gifts, an obligation to be executed in nature, and if this is impossible, to the extent of enrichment. Also, if the engagement is dissolved abusively,  the ‘guilty’ ﬁancé must provide compensation for both the past or future expenses for marriage (already contracted), its celebration, for preparing the marital home and also for any other material or moral damage caused.

The matrimonial convention acts as a prenuptial contract, a civil agreement that establishes the distribution of assets in case of divorce. In absence of a convention, the current laws apply, which lead to an equal distribution between the two parties.

Matrimonial conventions have to be concluded in writing and authenticated by a notary public. The conventions are then registered with the National Register of matrimonial regimes, kept in electronic format by the National Union of Public Notaries from Romania.

The new Civil Code stipulates 3 possibilities to choose the matrimonial regime, when concluding the marriage:
legal community – the spouses may choose whether those assets will be like before, respectively common assets, and in case of divorce to be divided in equal shares, regardless of the amount of effective material contribution of one of the spouses at their acquisition (the standard for Romanian marriages before the New Code was introduced);
separation of property –  spouses may choose that the assets acquired after marriage to follow the legal regime of individual assets, so that in case of divorce each of the spouses to get the assets individually acquired;
conventional community – spuses have the freedom to choose that the assets to follow a legal regime of joint ownership, but based on the criterion of individual contribution. This means that in case of partition, the assets are to be divided not in equal shares, but according to their effective contribution at their acquisition.