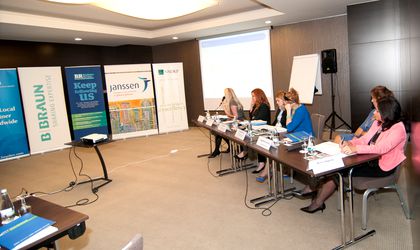 As the Romanian pharmaceuticals market grew by 12.6 percent to around EUR 1.2 billion in the first half of this year, the industry is grappling with a destabilizing claw back tax and the ongoing quest to harness its talent, according to HR specialists and executives who attended last week’s Pharmaceutical Industry Roundtable, organized by Business Review.

Last year, the 2.6 percent growth for the five major European markets and 3.6 percent posted by the US market were dwarfed by emerging Brazil and China, which expanded by more than 20 percent. Nevertheless, companies invested more than EUR 27.5 billion in European R&D last year.

Over 660,000 people were employed by this sector, including 20,000 in Romania, according to a 2010 study by the European Federation of Pharmaceutical Industries and Associations.

Companies are constantly looking for “high flying” employees, and knowing the features of the regional market can help you leapfrog competitors.

The market in Central Europe must cope with the mobility of talent and emigration of well educated specialists, while the scientific talent pool is poor due to educational restrictions in the past, according to Kerstin Roubin, partner: healthcare practice leader at Boyden Global Executive Search Austria.

Pharma companies still have difficulties in filling business unit, sales and business development positions. High staff turnover and low loyalty are other reasons for concern. However, it is not all bad news, as the region is registering increasing market volumes and employees have excellent language skills and intercultural understanding. The pool of well educated technicians is another advantage for Central Europe.

“In Central and Eastern Europe the talent is more career oriented, more flexible,” said Roubin. High assessment standards and a decentralized recruitment processes are other necessities from employers looking to tap the talent pool. The industry could make Central Europe a hub by increasing investment incentives and improving labor laws, according to Roubin.

Companies are fighting for talent in a competitive market, but developing the right skills is key to getting the upper hand in the pharma sector.

“We need more people in inter-changeable roles. If we have people that evolve in other roles they will be happy,” said Angeliki Economou, HR manager at Janssen Romania. “Apart from medical representatives, there is no limit when it comes to mobility,” said Economou. The myth is that mobility is only useful in the case of senior roles.

A focus on growth and addressing the talent shortage, as well as improving leadership capabilities, have helped boost growth this year, according to a survey carried out by Boyden. The firm sent a brief questionnaire to HRs, business directors, board members and CEOs in Romania’s pharma industry. The response rate of 11 percent allowed reliable conclusions to be drawn.

“We are not so focused on new market challenges, increasing innovation or updating systems like IT, in sourcing or outsourcing,” said Anca Podoleanu, country manager, Boyden Global Executive Search Romania.

Claw back remains an issue

In 2009 the government approved a claw back tax in an effort to control the budget allocated to medicines and to bring additional funds to the healthcare system. The tax has to be paid by pharmaceutical producers, who deem it uncertain and unsustainable.

Authorities came up with the claw back mechanism in order to cover the budget deficit, according to Delia Belciu, partner at law firm Nestor Nestor Diculescu Kingston Petersen (NNDKP).

“There have been four types of claw back until now and the first was set up in October 2009,” explained Belciu. She added that the tax had to be paid by holders of marketing licenses for medicines. Drugs included in national health programs, ambulatory care and those used in hospitals and dialysis centers are taxed. The fiscal agency ANAF became the collector of the claw back contribution in 2011. The government decided to make the claw back a fiscal contribution in the second version due to the significant sums that still had to be collected from companies, according to Ana-Maria Miron, partner at NNDKP.

“It was rumored at some point before the advent of the second claw back that some EUR 800 million had gone uncollected from the first claw back,” said Miron. The government recently approved an ordinance that offers a facility for payers in an effort to collect some money, and some players in the industry have taken advantage of it, according to Miron.