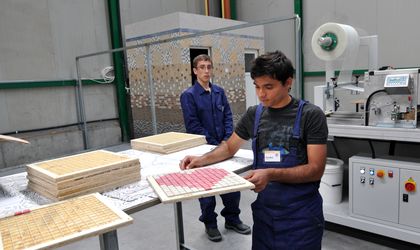 Part of a project promoting partnerships for the development of the social economy, Romanian NGO Fundatia Dezvoltarea Popoarelor has opened a mosaic factory, following an investment of about EUR 192,000, which will employ 12 young people with social integration problems.

The recently opened Proiect Mozaic (Project Mosaic) is the first local mosaic pavement factory financed from EU funds based on the principles of a social enterprise. The project is being developed by Romanian NGO Fundatia Dezvoltarea Popoarelor (the People’s Development Foundation) which offers educational and socio-professional integration opportunities to disadvantaged people.

The initial investment for the start-up is RON 827,014 (approximately EUR 192,000), which also covers  the company’s costs for its first four months of activity. Some 95 percent of the money comes from the European Social Fund.

Initially, the mosaic factory, which is located on the outskirts of Bucharest, will create 12 jobs for people aged between 20 and 23 who have lived in institutions and suffered from social exclusion. “With this social involvement, the factory will obtain the status of a protected enterprise which benefits from Law 448/2006. This law stipulates that every company that employs more than 50 people must either hire disabled people (a four percent share of its workforce) or pay the state a tax. A third possibility would be to purchase goods or services from a protected unit such as ours,” said Simona Carobene, project manager.

The foundation decided to set up the social enterprise after visiting about 18 social cooperatives in Italy, said Carobene, but the idea to produce mosaic pavement came from Luigi Caverni, manager and main shareholder of constructions materials company Menatwork and a supporter of the foundation. Partnerships with the business environment like the one with Menatwork are vital for developing such projects, said Carobene.

The foundation’s plans for the mosaic factory are to produce about 1,800 sqm of mosaic per month and to reach a turnover of RON 1.25 million (approximately EUR 290,000) by 2013. “One cannot talk about the social economy and exclude the business dimension,” said the project manager, explaining that like any other company, the factory will have to be profitable in order both to sustain itself and finance the foundation’s projects.

The NGO works with 240 disadvantaged people, and in addition to Bucharest has branches in Cluj, Oradea and Dambovita.

While the social economy is in an early stage in Romania, countries like Italy have a long history in the field. Social enterprises promoting social and professional integration have been active in Italy for more than 30 years, said Marco Nottari, director of Italian social cooperative Il Carro, which was set up some 25 years ago.

The same business management principles apply to a social enterprise as to any another company, explained Nottari. “The cooperative’s final purpose is not to make money but money is vital in order for it to meet its mission – that of integrating disabled people. Without efficient management, professional integration would not be possible,” he added.

Il Carro has an annual turnover of about EUR 2 million, out of which 10 percent is profit. “The Italian state gives us EUR 8,000 each year and by comparison our turnover was EUR 2 million. So we either support ourselves or might as well close down,” he added.

The cooperative’s activity is office cleaning and green space maintenance services as well as manufacturing and handicrafts. It has 87 employees out of whom 27 are disadvantaged.