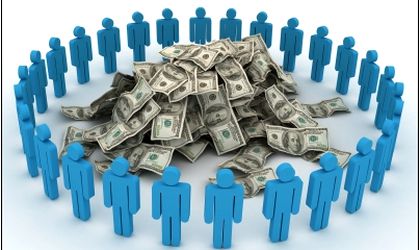 Crowdfunding is entering the mainstream as a way of raising funds in the United States, while in Europe it is still gaining a foothold. Romania, meanwhile, is pretty late to the party, but already has a handful of crowdfunding platforms and has seen some initial attempts to secure money for projects.

An entrepreneur or NGO who believes in their project may be well-advised to take the untrod path and look elsewhere for financing, away from the traditional models offered by banks, venture capital, or even business angels or the average donation campaign.

“Crowdfunding is not yet frequently used in Romania, and Kickstarter, the most popular crowdfunding platform in the US, cannot yet be used legally from here. Even so, there are a few success stories where people have managed to finance their activity via crowdfunding. An example is FaceRig, a Romanian start-up which carried out a crowdfunding campaign using Indiegogo and managed to raise over USD 300,000, even though its initial target was USD 120,000,” Bogdan Iordache, CEO of How To Web, tells BR.

Apart from Kickstarter.com and Indiegogo, other platforms have made a splash, such as the business-dedicated Crowdfunder, which offers a blend of donation-based and investment crowdfunding from individuals and angel investors, and Crowdrise, a platform for donation-based funding for good causes and charity.

“I strongly believe crowdfunding can be the answer for startups in the future because such a campaign allows one to test the idea; and the more money the future consumer offers in advance to build the product/service, the greater the validation. In this case, the value of a crowdfunding campaign does not lie so much in the sum that can be raised but in the feedback the entrepreneur receives,” blogger Andrei Crivat tells BR.

Romania too can boast a few local crowdfunding platforms of its own, such as crestemidei.ro, multifinantare.ro and wearehere.ro.

“Crowdfunding is still in its infancy in Romania. Our experience with Tara lui Andrei has convinced us of the power of initiatives that manage to coagulate communities around them. (…) It all starts from proactive people who believe unconditionally in an idea and are willing to invest time and energy in it; they are then joined by volunteers or supporters who disseminate information on the project among their circles. They are all equally important for the success of a project but also for obtaining financing via crowdfunding,” Mona Nicolici, CSR communication manager of Petrom, tells BR.

She adds that some projects have managed to raise funds in Romania, proving the model works. “There are platforms that do crowdfunding at a professional level, which provide advice for initiators from experts with a fundraising background abroad, where this phenomenon is much more developed. More and more projects are resorting to this financing option. All the ingredients are in place for crowdfunding to be successful locally. But the deciding variable is the quality of the proposals that aim to attract support from the public,” adds Nicolici.

Blogger Andrei Cismaru tells BR that credibility is probably the most important ingredient, since not only in crowdfunding, but also in other domains, the lack of it can doom a project.

One project that got money using crowdfunding is Making Waves, a festival showcasing New Romanian Cinema organized by the Film Society of Lincoln Center, Jacob Burns Film Center and the Romanian Film Initiative, in collaboration with the Transylvania International Film Festival. It is the only comprehensive US festival dedicated to showcasing and celebrating the best of Romanian contemporary cinema as well as rarely seen classics. Crowdfunding contributed to making that happen.

“In Europe, the crowdfunding model has just appeared. Crowdfunding is successful only in the United States for now. (…) We have organized campaigns twice, and each time we managed to raise around USD 20,000, representing one fifth of the total sum we needed for Making Waves,” Corina Suteu, president of the festival, tells BR.

“Many social projects dedicated to children, the elderly or the underprivileged will find it easier to benefit from crowdfunding. They carry a heavy emotional charge, that’s why. But Kickstarter, the platform we used, addresses exclusively creative projects and has become an essential fundraising interface for independent film in the USA,” adds Suteu.

Basically, there are two main types of crowdfunding. The first is donation-based, where funders give in return for products, perks or rewards.

The second and more recent model is investment crowdfunding, where businesses seeking capital sell ownership stakes online in the form of equity or debt. In this model, individuals have the potential to recover their capital by becoming owners or shareholders.

“The social and cultural domain may have adopted this method in Romania ahead of others because many project initiators in these fields are constantly looking for new ways to support their projects and dare to maintain more diversified financing sources. But as soon as we begin to understand that donations are not just for humanitarian causes, but represent a strong tool which can help us create independent journalism platforms, unique cultural happenings, and useful and accessible technology, I think we will be seeing this method used in more and more domains,” says Crivat.

According to Oana Man, co-founder of crestemidei.ro, ”One of the major challenges is to do away with the association between crowdfunding and begging. We must all understand that small donations contribute to making unique projects that generate value and have a positive impact in the community. We are not talking about giving money ”out of charity” or ”for free” but to support innovation and creativity. Another challenge is to identify the projects, it seems there are not so many outside the creative sphere.

”Technical or research projects are more ample, more rigorous, less accessible to the average individual and they usually benefit more easily of conventional financing. In spite of these, on crestemidei.ro, at the end of 2013 a submarine robot was launched at the end of 2013, which was a technical project,” she says.

Suteu points out that a campaign should include a presentation film and have a very well-thought out system of rewards, while the money must be sought for a very clear purpose. Throughout the campaign, there must be constant communication with potential donors and information must be transmitted in a tailored and consistent manner. Also, the rewards must be very tempting, advises Suteu.

“We carried out the project using our database, but especially via social media, personal conversations, and tireless lobbying of friends, partners and acquaintances,” she tells BR.

But, as in any pitch or competition, there are winners and losers, and the difference may be not in the value of the project but in the way it tells its story.

“The success of a fundraising campaign depends to a great extent on the story it tells: about its initiators, their courage to change the world, and those who are joining and contributing. The story of a platform must be conceived in the same tone, bringing added value to each project that is being presented,” says Crivat.

He points out that the story must be told “plainly and clearly,” the funds must be used in a transparent manner, reporting constantly to those who contributed and involving them in making the project in as original a manner as possible.

“Last but not least, a great deal of enthusiasm is needed from the fundraising team – sometimes you must get over 99 rejections before receiving one contribution, but this will not change the value you create with your work at all,” says Crivat.

He tells BR that for some time, he has been seriously entertaining the idea of developing the Prin Transilvania project through crowdfunding on the crestemidei.ro platform.

“crestemidei.ro has had local successes, such as financing a campaign in 24 hours and keeping the financing rate of the projects at over 50 percent. A lot of very fine projects have managed to find financing rapidly on crestemidei.ro, which I believe is due to the total involvement of the team behind the platform,” says Crivat.

Crestemidei.ro has so far hosted 20 campaigns- 18 of which are closed and 2 are ongoing. Of the 18 closed campaigns, 9 were financed integrally, one received sponsorship and was taken over by a private company, and 9 were not financed integrally. Out of the campaigns that were financed integrally, 7 were finalised and 2 are being implemented. The value of the financed campaigns exceeds EUR 13,000.
”It helped a lot that we were the only crowdfunding platform in the world that launched via a crowdfunding campaign that had 42 supporters who were honorific members of the website,” Oana Man, co-founder of crestemidei.ro, told BR.

One project that is currently seeking funds on the site is Volunteers Fest, a festival which aims to promote volunteering among young people in Romania. The first edition of the event brought together 850 volunteers who participated in over 40 activities.

“Unfortunately, we are living in times when it is very hard to obtain sponsorship for cultural or educational projects, but crowdfunding offers us the chance to put into practice all the beautiful ideas that aim to educate young people. (…) We chose crowdfunding because we believe it is a creative initiative and offers us the opportunity to observe the reaction of those around to such a project but also their involvement in the personal, and especially professional, development of our generation,” Alexandra Burdulea, PR manager of Volunteers Fest, tells BR.

For this edition, Volunteers Fest, which will take place between March 24 and April 6, will be trying to raise RON 2,000 to cover the costs of materials for education and creation workshops, equipment for sports activities, starter kits for the Treasure Hunt and the Volunteers’ Marathon and the diplomas presented to participants.

Crowdfunding platform PotSiEu.ro, started in June 2013, has initiated seven campaigns, out of which three were fully financed.

“We started from a formal community that formed around the team at The Hub Bucharest who were also our godfathers – in this space the team of founders was formed and started working – to which we added a community of friends and acquaintances, so at the launch the space was packed,” Catalina Azamfirei, solutions creator of the PotSiEu.ro platform, tells BR.

PotSiEu.ro managed to raise funds for projects such as Iurta calatoare, which attracted RON 5,196, the Intrarea Violoncelului campaign (RON 7,638) and the campaign Ba Se Poate! (RON 29,520).

In total, PotSiEu.ro has raised over RON 42,300. “The first two campaigns were implemented from last year while the third, which covered part of the production costs of the film with the same name, proved there is a community interested in finding out through film how to improve the education process through coaching,” says Azamfirei.

The average value of a donation on PotSiEu.ro was around RON 80-100. The campaigns that had an exit mainly offered services to do with starting a social business.

“This way of mobilizing funds is influenced greatly by the financial power of the supporters and consequently, in the consultancy we offer interested parties, we suggest they take into consideration that the success of a project also depends on the lack of maturity of the market. A campaign in the technical domain requires a much higher initial capital and naturally a corresponding number of supporters, and on the other hand it must propose something that is attractive enough for people with extremely diverse interests,” Azamfirei tells BR.

Projects where contributors recover their investments are favored, of course. “Whether we are talking about material gain or awareness, or simply the satisfaction of doing a good deed, the results must at least match the expectations. In a world where materialism is gaining ground, philanthropic acts become eccentric and start to look like exceptions,” concludes Cismaru.