Local and international entrepreneurs to come together at How to Web 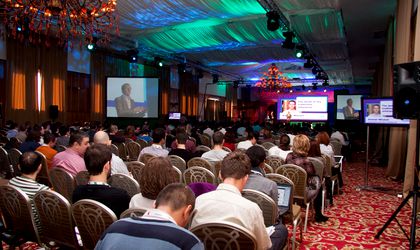 The fourth run of How to Web, one of the largest regional events on innovation, entrepreneurship and technology in South-Eastern Europe, will bring key international and Romanian speakers in contact with local startups on November 20 and 21 in Bucharest.

This year, speakers such as Thomas Hartwig, CTO and co-founder of gaming company King.com, Christian Reber, CEO and founder of 6Wunderkinder, one of the most dynamic European startups, and Paul Ford, vice-president and CIO of Softlayer, an infrastructure company acquired by IBM for USD 2 billion, will share their experience and advice with current and future entrepreneurs at How to Web at the Crystal Palace Ballroom.

The list of key international speakers continues with Adii Pienaar, co-founder of WooThemes, Kei Shimada, business development director of Dentsu, Tal Siach, co-founder and CMO of Visual.ly., the largest community of infographics and data visuals in the world, Michael Levit, founder of Spigot and managing partner of Founders Den, a shared office space and private club for entrepreneurs in San Francisco.

Romanian entrepreneurs such as Anda Gansca, CEO and founder of Knotch.it, and online entrepreneur Bobby Voicu, founder of MavenHut, will also address the event.

“I believe each startup in Romania should go through the startup competition,” said Voicu, who obtained EUR 500,000 of financing from an investment fund which he used to grow MavenHut.

“In Romania, what is missing is the long tail of startups that should bring value to the table,” said Andrei Pitis, president of the Employers’ Association of the Software and Services Industry (ANIS). He added that the industry had tipped the scale towards outsourcing, which is still cheaper than in other countries, but companies have found that good products can be made in Romania.

Since 2008, the number of R&D centers has grown exponentially in Romania. Companies such as Freescale, IXIA, Intel, Infineon, Adobe, King, Electronic Arts, Ubisoft and Gameloft have opened R&D centers in Bucharest.

In Timisoara, Continental and Alcatel have established such operations, while Iasi is home to centers for Embarcadero, Ericsson and Amazon. Meanwhile, HP has opened up in Cluj and Windriver in Galati.

Bogdan Iordache, co-founder of How to Web, agrees, saying, “The South-Eastern European region will move from services towards innovation.”

Under the How to Web umbrella, the Startup Spotlight will bring together 32 startups and international accelerators, investors, technology experts and support programs. The teams with the best results will get to showcase their products on the main stage and the winners will receive USD 20,000 in cash.

Among the confirmed investors present at the event are TechStars, which provides seed funding from over 75 top venture capital firms and angel investors, Seedcamp, which targets the entrepreneurial community in Europe, private equity and venture capital firm 3TS, venture fund Eleven, LaunchHub, a seed fund that invests mainly in ICT startups in SEE, and Rockstart, an accelerator for startups.

The 800 participants expected at the event will come from Bucharest, Timisoara, Sibiu, Craiova and Targu-Mures as well as other countries in the region such as Bulgaria, Greece, Serbia and Croatia.

“One of the main problems in organizing a regional event of this kind is that there is no low-cost airline between the cities across South-Eastern Europe and there are no highways like in Western Europe,” said Iordache.