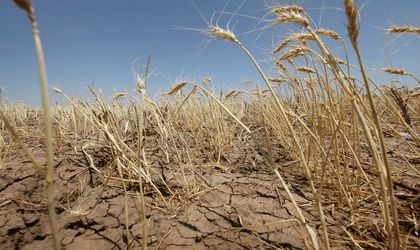 Laurentiu Baciu, president of the League of Agricultural Producers’ Associations in Romania (LAPAR), told Mediafax in early August that the drought had severely affected crops this year, costing producers more than EUR 2 billion in sunk investments, and will raise the prices of Romanian products.

Meanwhile, the minister of agriculture, Daniel Constantin, said that the authorities would grant specific indemnities to small and large farmers (the latter requiring the approval of the European Commission), claiming that there was no accurate assessment of the effects of the drought on agriculture.

According to Mediafax, Constantin said that probably every farmer had incurred losses due to the spring drought. However, crops sown in the autumn of 2014 at the end of the harvest had not been badly affected. For example, for wheat and barley, 2015 results are slightly better than in 2014. While in 2014 the average wheat production per hectare was 3.64 tonnes, in 2015 it is 3.68 tonnes, and the amount harvested, according to the latest data, is 7.5 million tonnes, up from 7.4 million tonnes in 2014. Barley production per hectare stood at 4.03 tonnes this year, versus 3.8 tonnes in 2014, with a total of 1.05 million tonnes having been harvested. Rape yields were down, however, at 2.36 tonnes per hectare compared with 2.57 tonnes in 2014.

“Spring crops, especially maize and sunflower, are likely to be affected by the drought to a certain degree. We will try identify the worst hit areas, based on farmers’ losses, so as to provide the compensation allowed by the state budget while taking into consideration the losses suffered by individual farmers,” Constantin told Mediafax. “For small farmers, who have had losses of more than 30 percent of their acreage, we will give aid from the state budget under a de minimise scheme that will be established by government decision in September, following the first budget amendment. Damages will be awarded depending on the financial resources received by the Ministry of Agriculture.”

For large farmers, whose compensation should be higher, the European Commission has to be notified. “We expect the European Commission’s response – whether to grant these schemes from the state budget – will come in a few months, and immediately afterwards we will pay these damages, most likely in early 2016. We are working on preparatory documents in order to ask the European Commission to give us help. If we do not receive this assistance, there is already a government commitment working on the two schemes to which I referred,” said Constantin.

State aid for farmers affected by drought is subject to European regulation, which bars such aid from exceeding 0.6 percent of GDP.

A program of irrigation that was started in 2012 is due to be completed in 2020. It has a record allocation for the post-December period, almost EUR 600 million from European funding for rural development programs from 2007-2013 and 2014-2020. “Currently EUR 128 million has been invested in the implementation of projects serving an area of ​​about 400,000 hectares. And for 2014-2020 we have already launched the projects application session for values ​​exceeding EUR 430 million,” added Constantin.

The agriculture minister said that crops planted in autumn would not incur losses, as efforts were underway to safeguard the harvest. The authorities agreed with farmers to try by the end of August to give them the certificates based on which they could begin to take out the loans they need to begin sowing autumn crops. “And we will do our best from 16 October to facilitate the European Commission advance payments based on the owned surfaces, as we have done for the last three years,” said the official.

The head of LAPAR also wants to sue the National Meteorology Administration (ANM), because it failed to predict the bad weather that contributed to farmers’ losses.

However, ANM management denies any fault and said it had done his duty. “The ANM, from March 1, updated the soil water reserve status daily under operational procedures. Weather forecasts for seven days in advance and for two weeks in advance for each region are updated daily. Data from the European Centre, which estimates the Romanian average monthly temperatures and rainfall over next three months, are also updated daily, so users can see what is going to happen,” said Elena Mateescu, ANM executive director.

TheNational Federation of Unions of Agricultural, Food, Tobacco, Fields and Related Services (Agrostar) says that, besides a clear strategy on the irrigation sector, what is needed are measures to prevent desertification and landslides, maintain soil humidity and similar. “In recent years, extreme weather (such as drought, excessive rain and hail) has become more frequent and the sector is suffering from a lack of coherent policy on the medium and long term. Investments in irrigation have been too low. They never materialize, and where irrigation systems are in place there are very high electricity prices. Romania should have an agricultural policy that takes account of climate change,” said Horațiu Raicu, secretary general of Agrostar.

Constantin said that in September-October Romania will get an answer regarding its proposed projects under the Juncker Plan (an investment plan for Europe). “If we succeed, then we will improve basic infrastructure for irrigation. Under the Juncker Plan, if our project is approved, we have three alternatives: public-private partnership, loans – which I would not wish to consider – and a bill that we have in Parliament, to allocate a larger budget to the main irrigation infrastructure,” added the minister.

Some 90 percent of the irrigation system has been destroyed, so of the 3.3 million hectares irrigated in 1989, only 300,000 hectares are currently being used.