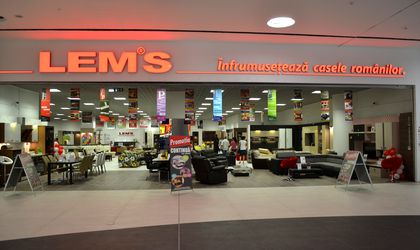 Lemet, one of the largest furniture manufacturers nationwide, opened in mid-May a new Lem’s store in Bucharest. The store is part of the Mega Mall shopping center and covers 1400 sqm of showroom. The investment required to open Lem’s Bucharest Mega Mall is RON 1.3 million (EUR 290,000), according to the company’s representatives.

Lem’s is currently present in Bucharest with six stores, out of which two franchises and the total showroom area is over 6000 square meters.

With the Lem’s Bucharest Mega Mall store, the network reached a total retail area of over 68,000 sqm at national level.

“We opened in the Mega Mall the third Lem’s store this year, after Miercurea Ciuc and Focsani. The investments in the Lem’s stores amounted so far to RON 4.5 million (EUR 1 million), for nearly 5,000 square meters of showroom,” stated in a release the company’s representatives.