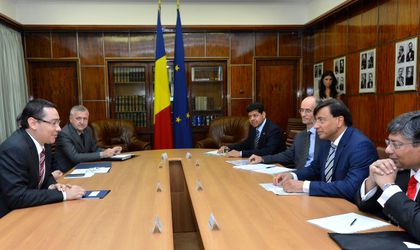 Lakshmi Mittal, the president and CEO of ArcelorMittal, one of the largest steelmakers in the world, met on Friday with Romanian PM Victor Ponta to discuss the sustainability of the steel industry in Europe and in Romania particularly.

“ArcelorMittal expressed its hope that Romania will remain attractive for foreign investments and that the Romanian government will take the appropriate measures, such as ensuring competitive energy costs, in order to ensure the sustainability of Romania’s steel industry,” said the steelmaker in a statement.

Steel mill ArcelorMittal Galati said in the past few months that the additional taxes they have to pay for electricity, such as the green certificates and the co-generation tax, dents its competitiveness and may eventually see the steelmaker leave the country.

The government announced plans to cut the renewable support scheme in order to protect big industry but a final decision on the scheme reduction hasn’t been sealed yet.

According to local media, ArcelorMittal employs more than 7,000 people in Galati, making it the largest local employer and one of the biggest in the country.