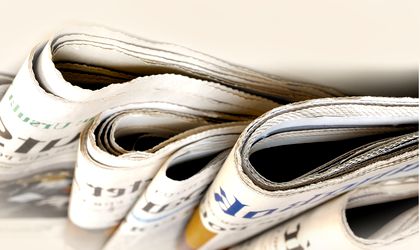 The Romanian media scene has come under scrutiny from three reports released so far this year. While there have been improvements from the international standpoint, local journalists paint a grimmer picture. Faced with economic pressures that leave outlets at the mercy of political forces, the media is also suffering from a lack of moral values.

“As a democratic state, Romania should be worried about what its media look like. The wise move would be a serious, long-term, massive investment in media literacy education for the public. Not only do media outlets embark on biased agendas, but these agendas are enjoyed by large audiences, which encourage their producers to give more of the same. If one is really interested in stopping this, the ‘consumer’ should also be part of the equation,” advises Ioana Avadani, director of the Center for Independent Journalism and MDCEE (Media and Democracy in Central and Eastern Europe) Visiting Fellow.

The current situation facing the Romanian media is the result of a combination of factors. “Advertising budgets for print have shrunk by 70-80 percent over the past few years. Of course, this has also meant massive lay-offs so job uncertainty often comes above respecting professional standards,” says Petrisor Obae, editor of Paginademedia.ro.

In the pocket of politicians

The OSCE (Organization for Security and Co-operation in Europe) report published on January 16 slams the media in Romania, saying outlets prefer to become an instrument at the disposal of political parties, rather than play a critical and analytical watch-dog role towards public officials, due to the precarious financial situation of the media market in recent years and outlets’ resulting vulnerability to political interests.

The report also specifically mentions that while the role of the internet is increasing, citizens still rely mostly on television for their information on political issues. “Media outlets more at risk from external, non-editorial pressures are, obviously, those considered to have a bigger impact on consumers: TV stations and local newspapers,” says Avadani.

She quotes recent studies that show that some 80 percent of Romanians watch TV. “If we put this with other data that indicate over 71 percent of people never watch local TV stations, we can see why the so-called national TV stations are so popular,” she says.

On the other hand, local newspapers, which deliver news from the area and cater better for local communities, exert a stronger influence over their readers than national newspapers, says Avadani. “Unfortunately, some of the big TV channels have openly adopted political stances, as have most local newspapers,” she adds.

The OSCE even names some TV outlets that it considers the worst offenders, such as Intact media group, which controls the most popular TV stations, including market-leader news channel Antena 3, owned by Dan Voiculescu, founder of the Conservative Party, part of the USL ruling coalition. B1 and OTV, which has since been closed down over unpaid fines, were also accused of promoting different political entities. The national public television service was described as over-zealous for avoiding controversial reports in its apparent effort to ensure impartiality.

Who is pressuring whom

In the Cooperation and Verification Mechanism (CVM) report on Romania, also published in January 2013, the European Commission cites numerous instances when the mass media has put pressure on the judicial system.

“The CVM report correctly identifies a phenomenon but sadly mistakes the roots,” says Avadani. She adds that the media has indeed run articles that can be seen as attempts to intimidate and exert pressure on the judiciary, “but omitting the fact that those media outlets are performing a direct order – be it of a political or personal nature – is missing the obvious,” she explains.

The EC recommended that existing norms be revised to guarantee that the freedom of the press is accompanied by a corresponding protection of institutions and fundamental human rights.

“The recommendation to review the legislation is missing the point, to a certain extent. Romanian legislation already provides both the necessary rules to protect human dignity, and redress mechanisms. Those mechanisms have rarely been used by those who claim we need more. I personally find it childish to ask for more protection when you don’t use what is in place, claiming that it would take too long. Well, yes, in Romania justice is served slowly – but one cannot blame the media for this. Or can one?” she wonders.

The Commission states that it has received numerous reports of the intimidation and harassment of people working in important judicial and anti-corruption institutions. “This is a sensitive subject because we know there are people who have used their positions in the press to intimidate, sometimes to blackmail. The risk is that because of a few rotten apples we will start to protect state institutions from journalists, which would really be a mistake. There is enough lack of transparency and condescendence in the authorities’ response. I think it would be a huge loss if they received more protection leverage,” says Cristian Lupsa, editor of nonfiction magazine Decat O Revista.

Still, Romania has improved this year in the opinion of the World Press Freedom Index released by Reporters Without Borders. Marking a five-place rise since last year, Romania was ranked 42nd out of 179 countries, albeit behind nations such as Botswana and Papua New Guinea.

Unfortunately, local professionals do not share this optimistic view. “In the past year, clashes between the media and politicians have intensified. Being partisan is the norm, not the exception, and information leaks and attacks are common. Add to this the sensationalism of entertainment programs and we have a cumulus of forces that creates a deafening noise for citizens, who no longer have someone to turn to for correct and well contextualized information,” says Lupsa.

There is no mystery why the mass media, not only in Romania but also abroad, is still striving to find a financially viable model, with little success. “Important press editors and owners in the West have been saying for decades that one of the guarantees of an independent press (ideally correct, responsible and working in the interests of the public) is the economic stability of the business,” says Lupsa.

Faced with a collapsed advertising market, many media outlets have had to rethink their operations. “One of the cost-minimizing strategies has been sacking the better paid journalists. One can imagine that those were the people who were better and smarter. Letting them go would affect the quality of content. The remaining journalists are either young and/or too scared to oppose extra-editorial pressures,” explains Avadani.

One way to remedy this situation is to provide more quality content – which is currently missing – which can bring the public closer and create sustainability, says Lupsa.

But perhaps more than anything in the area of financial and political pressures, the Romanian media has to deal with a lack of ethics and unity and needs to clean itself from the inside out, say professionals canvassed by BR. “This is a good opportunity for the honest professional to step forward and consolidate the self-regulation mechanisms, to help the public tell the difference between good and bad journalism. Self-regulation has failed gloriously in Romania – and professionals should be worried about this,” Avadani comments.

Pressure from publishers is only matched by journalists’ lack of solidarity. “At this point there is no strong professional association in the country to unite journalists,” says Obae.

Journalists have abdicated from professional, common-sense norms, he argues. “Principles such as informing the public in a correct and unbiased manner so that readers can form an opinion based on information rendered in good faith have been lost,” he says. “Media owners have managed to divide journalists, making them incapable of standing together. Not only do they give up, but they also believe fervently what they are told.”

On the other hand, Avadani insists that one cannot “clean up” the media in Romania in the absence of “the active and genuinely interested participation of publishers and media owners.” “As a media proprietor, you have an intrinsic duty of public service, as the media is the only business that enjoys a high constitutional protection. The media should give something back for this protection – and this ‘something’ is responsibility,” she says. “A lot of Romania’s problems do not lie in the laws and norms, but in the human factor, the ‘informal’ conduct of people in positions of power. Romania should not only ‘review’ its legislation and the way it is implemented, but also its moral values. But there are no signs of a ‘moral rejuvenation’ yet, I’m afraid,” laments Avadani.