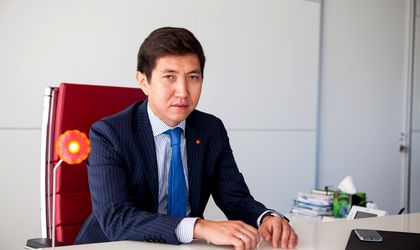 KMG International aims to conclude share buyback in Rompetrol Rafinare by year-end Azamat Zhangulov, senior vice-president of KMG International (formerly known as Rompetrol Group), owned by Kazakhstan’s state oil group KazMunaiGas, says the company will make a single bid of USD 200 million to buy back a 26.69 percent stake in Rompetrol Rafinare. He tells BR that the government is set to tender this stake in the next two-three months and the deal should be concluded by year-end, adding that he is “doubtful” there will be any rival bids.

Has the Romanian government ended all litigation with KMG International regarding the USD 600 million debt?

Yes, this is true. The government, as of March 24, closed all litigation processes. It means there is no threat to our investment activity here. We feel recomforted and thankful to the government for its very constructive position on this issue. We have finished the litigation so it is absolutely closed, withdrawn – there will be no future issues related to this topic. We are in the process of taking the next steps in implementing the memorandum (e.n. which was passed by the government in January and includes the terms of the deal).

Is the company’s intention to make the USD 1 billion investment program legally binding provided that it buys back the 26.69 percent stake in Rompetrol Rafinare?

We are in the process of completing the procedures for the transaction, because(…) it has to take place in accordance to the privatization law. It means that the government should announce an open bidding procedure and we will come to this with the already announced bid of USD 200 million. It is going to be one bid only and there is no chance to change it. Following this – and even now we are trying to move faster than the privatization schedule – we would like to start working on the investment fund. It is stated in the memorandum that the investment value in this fund can go up to USD 1 billion in seven years.

Do you know when the government will organize the tender to sell its stake in Rompetrol?

The government has a very tight schedule for different privatization issues, and the team working on this is pretty small because of the reduction of staff in recent years. We fully understand their schedule and we expect this to happen in the next two-three months, which means that the deal should finally be closed by the end of this year. We expect the active steps (e.n. of the privatization) to start at the end of summer, beginning of autumn.

Will you invest up to USD 1 billion in Romania only if you buy back the 26.69 percent stake in Rompetrol Rafinare?

When we had the idea to set up this fund, it was a package deal, so under this deal everything is set to happen based on one condition after another and so on. That is why we think that nothing will destroy this construction.

Are you going to invest this money in Romania or in the region?

The destination of these funds is Romania.

Do you have investment projects in mind already?

Yes, we have a few projects that have been identified and are being widely discussed and they are already initially financed for the feasibility studies – meaning the technical studies and preliminary phase of financing – so stage zero for these projects has already passed. As we start up the fund with the government, these projects are ready to be implemented. The initial projects that will be started have a value of roughly USD 350 million and we think we can easily operate other projects for the value of the total investment fund.

What specific types of investment projects do you plan to do in Romania?

It is specified in the fund’s documentation and in the memorandum that we have to apply our rules for investment planning procedures. That means there is already a preset of criteria there, so we think that the fund has to be around our activities. So it is an energy fund and has nothing to do with building hotels or other infrastructure. Also, the fund is made not for KMG itself to make the investment, but to attract investments from other investment institutions. This means that all investment projects inside the fund have to be profitable and interesting to the investors. We have our criteria on the internal capital rate we use and others. Of course these projects have to fit with these criteria. Security and environment issues are very important, so all these projects have to meet the best security and environmental criteria, which is standard in our organization.

Are you considering investing in local production in the oil and gas sector?

There are possibilities to invest in the exploration field.

The authorities are planning to hold a new licensing round for the onshore and offshore field soon. Are you interested in this?

We currently have a few concessions, which need to be further investigated so that we can see whether we agree with the government to put these projects under the umbrella of the fund. Also, if there are very interesting projects – mostly onshore because we do not think that we can bid for offshore in Romania – we can also bring them under the fund’s umbrella, not alone but in cooperation with other investors here.

Is KMG doing any offshore developments at group level?

At the moment we’re concentrating all of our offshore activities in the area of the Caspian Sea. The proven resources in the Caspian Sea are much higher than in the Black Sea. This means, for us not to lose concentration on our core market and activities, we will not site activities here in the Black Sea. But who knows? Maybe if there are some interesting projects and we can bring them under the umbrella of the fund… In my view, offshore projects are more expensive than the fund itself so it can be done with what is in the fund and with other business arrangements.

How is the fund structured and who are its backers?

The fund is set up like this: you have initial equity capital funded by KazMunaiGas, and is stated that it will be USD 150 million. Based on this initial capital, we will raise financing, which means bank loans, (e.n. investment) institutions, equity investors and some other types of investors, which will help us to build the fund up to USD 1 billion.

Have you drawn up a scenario in case KMG International fails to buy back the 26.69 percent stake in Rompetrol Rafinare?

In our opinion, it will not be our failure, so if the government can raise more money why not sell for a better price? But it is really doubtful that somebody could bid and execute the bid, because we cannot understand the business reasons of a company that could come and bid for the 26.69 stake.

But if the deal collapses, you are not going to invest up to USD 1 billion in Romania?

Frankly speaking, the investment projects are our idea so we can do them depending on the business stats. Today we have elaborated a very good mechanism to implement this type of investment for the benefit of the Romanian state, which gets 20 percent of this project.

Of course, everything, as in every investment, depends on the investment plan, on the ease of doing business, and so on and so forth. These are issues that we cannot control. We hope and believe that Romania is a good place to make investments because it is rich, has good people, good resources, is situated very well near the Black Sea, and so it is full of opportunities.

We cannot say that it is the only set-up to do something. The set-up we have identified here is, we believe, the best one in favor of both parties, and we do not think it is beneficial to anyone to destroy this set-up.  But we also have to keep in mind that our life is not just Romania or Kazakhstan.

The world is big enough for other investment opportunities and we, as an international company, are not focused just here – the horizon is much wider.

Currently, the best investment projects in KazMunayGas’s portfolio are in Kazakhstan. They are the most efficient, with better yields, let’s say, so you can easily get through the approvals process. Kazakhstan ranks well for doing business and in other indexes. There are other countries in these indexes which are also attractive for investments, so we are always looking for different countries for opportunities. We would like to put this here.

How much has KazMunaiGas invested in Romania?

Up until now, the total value of investment in the infrastructure, meaning physical assets upgrades, buildings, and so on and so forth, is USD 1.2 billion.

How has the new fuel excise of EUR 0.7 percent liter that was rolled out this April impacted your sales?

Fuel sales in Romania have been affected to a certain degree. In April alone, the local market dropped 11 percent (e.n. against the same period of last year for KMG International sales), and compared to May it is down 4 percent, but that is still a big drop, which affects not only the sales but also the margins.

It is just our assumption but we do not think that this is different from the other companies because in the first five to seven days of April there was almost nothing (e.n. in sales) because everybody had bought their fuel on the last day of March.

How do you expect your sales to do by the end of this year?

Our sales plan is higher than last year and we think that we will execute it. We have high hopes for the agricultural campaign, summer and other seasonal improvements. We believe that the 3.9 percent GDP growth in the first quarter is going to generate more business activity.

February 2013 – Rompetrol Group and the Office for State Ownership and Privatization in Industry (OPSPI) ink the memorandum of understanding closing the dispute over the 2010 conversion into shares of bonds in Rompetrol Rafinare issued in 2003. This share conversion aimed to partially cover a historic Rompetrol Group debt to the state budget of around USD 600 million and saw the Romanian state end up with a 44.69 percent stake in Rompetrol Rafinare, the operator of the Petromidia Navodari and Vega Ploiesti refineries

May 2013 – The government passes a bill approving the memorandum of understanding concluded with Rompetrol Group; in the same month the bill is approved by the Chamber of Deputies and the Senate

June 2013 – The Constitutional Court rejects the appeal of right-wing party PDL, which says the bill is unconstitutional

July 2013 – Romanian President Traian Basescu asks the Senate to reexamine the bill, but his request is rejected by MPs

October 2013 – President Basescu asks the Constitutional Court to analyze the bill, stating it applies solely to one company, after it was readopted by Parliament

November 2013 – The Constitutional Court throws out the bill, declaring the memorandum unconstitutional

He graduated from the Kazakh State Academy of Management in international economics, oil business.