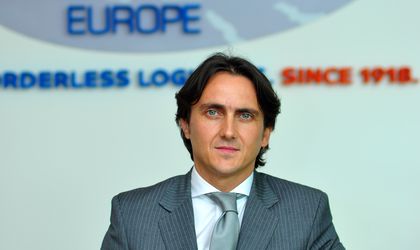 The Romanian subsidiary of KLG Europe, an integrator of transport and logistics services based in the Netherlands, plans to double its warehousing capacities in Romania next year, in a move designed to accommodate higher demand on the local market.

The company currently has a 21,000-sqm warehouse on the A1 highway, linking the cities of Bucharest and Pitesti, where it also owns 18.5 hectares of land in the same area. It has another 6.5 hectares in the city of Turda, Cluj County, where further expansion is planned.

Dragos Geletu (in picture), managing director and partner at the Romanian branch, says this year the company has started to work on 10,000 sqm of warehousing, and is planning to add another 10,000 sqm next year, representing a combined investment of around EUR 10 million.

Geletu forecasts a 10 to 15 percent hike in next year’s turnover, from the current EUR 21 million, citing growing demand from large companies, including multinationals that have decided to outsource their transport and logistics operations in a bid to cut costs.

“Theoretically, most of the companies on the logistics sector registered growth because there is potential,” Geletu told BR. “The fact that we have products on our shelves that are more expensive than in Western Europe doesn’t mean anything else but inefficiency in logistics.”

The company is also aiming to beef up its trucking arm, with plans to double its fleet to 100 rigs by the middle of next year, which will require another EUR 2 million in fresh investments. KLG Europe’s Romanian drivers travel across various European countries, including Germany, Italy and France.

Since establishing its local operations at the end of 2006, the company has made local investments of around EUR 25 million, incrementally increasing its headcount to 400 employees at present. It is currently working for companies operating complex distribution chains, such as electronics manufacturers Panasonic and LG, telecom operator Orange and Domo, the Romanian household and IT retailer.

Geletu reckons that Romania’s excellent geostrategic position can woo foreign companies active in the transport and logistics business, turning the Constanta harbor into an eastern gateway to Europe, primarily for China, the world’s manufacturing behemoth. He argues that smart taxation moves such as the future adoption of VAT deferment, meaning a delay of VAT payment on imports until the sale is made, could be one of the first steps towards this end.

“This means that big foreign companies could develop distribution centers here. For instance, everything manufactured in China can come here and supply other countries. Why go to Rotterdam and return (e.n. the freight) 2,000 km to supply South-Eastern Europe?” says Geletu. He suggested Chinese goods could be distributed in the region through to Vienna.

He added that Bulgaria has taken a more pragmatic approach and already adopted the deferment of VAT on imported goods. The Romanian authorities aim to roll out this measure from 2017.

“Such a measure has a limited impact on the budget in the short term, but it creates jobs and attracts new companies,” commented the director.