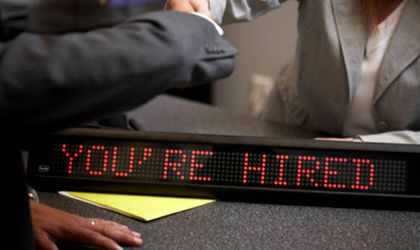 KFC and Pizza Hut are looking to hire up to 450 people for the restaurants that will open this year, the local franchise operators announced.

The posts open are for entry levels, allowing for growth within the company after one year of activity.

“Also, since February, we increased the salaries by an average of 20 percent in the restaurants. The two networks are evolving, so that we have jobs available in many cities in Romania. During this period we are looking for over 450 new colleagues for KFC and Pizza Hut restaurants we will open nationwide this year,” said Mark Hilton, franchise business consultant KFC and Pizza Hut Romania.

KFC operates as a franchise under the management of US Food Network, with 58 restaurants in Bucharest, Timisoara, Cluj-Napoca, Suceava, Oradea, Pitesti and Brasov. It is active locally since 1997.

Pizza Hut has come to the Romanian market in 1994 as a franchise operated by American Restaurant System. The network includes ten units in Bucharest, two in Cluj and one each in Iasi, Constanta, Ploiesti, Timisoara, Brasov and Oradea.