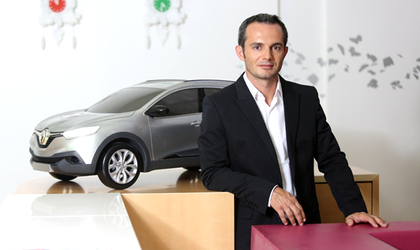 Starting September this year, Jean Philippe Salar (42) replaces Geoffrey Gardiner as director of Renault Design Central Europe (RDCE). Gardiner moves on to become director of design within the Renault-Nissan Alliance, at the Technocentre (research and development centre of Renault), France.

With an experience of 19 years within the Renault Group, the new head of the design office of Renault in Bucharest contributed to the development of several models sold by the group in the world, such as: Twingo, Clio 3, Scenic Trafic 2, Fluence, Megane cabriolet, Megane break and, most recently, Kwid, designed for the Indian market.

After obtaining a master’s degree in Transportation Design at Strate Ecole de Design, Jean Philippe Salar started his designer work at Renault in 1996, in the department of utility vehicles, where he contributed to the development of the Traffic 2 model. In 2000 he joined the Renault Barcelona Design satellite centre in ​​Spain. In 2001, Salar returned to France at the Technocentre. Here his design proposal for the Clio 3 and Clio 3 RS is selected. Between 2004 and 2005, part of the design team at Renault Samsung Motors (RSM), he contributed to the SM5 and SM7 models, sedans designed for the Korean market. In 2005 he returned to the Technocentre where he took part in the development of the entire Megane range. In 2008 he became head of Renault’s design studio in Mumbai, India, developing, together with his team, the designs for Duster, Pulse, and Kwid Scala, one of the newest models of Renault. After the experience of India, Jean Philippe Salar returned to RSM as project head.

RDCE is located in capital city of Romania and was founded in 2007. It is part of the international network of design centres – Satellite Renault Group. The other centres are located in the cities of Sao Paulo (Brazil), Kiheung (South Korea), Chennai and Mumbai (India).