Isarescu: Bucuresti is ready to enter the Euro Zone, but not Las Fierbinti 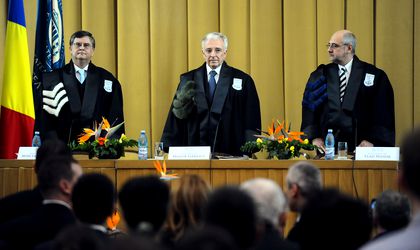 Central Bank governor Mugur Isarescu was awarded the title of Doctor Honoris Causa in a special ceremony organised on Thursday at the University of Bucharest. The prime-minister Victor Ponta was also in attendance at the event.

On this occasion, the bank official made several comments.

Bucharest and Ilfov County can enter the Euro Zone right now, Isarescu feels, the rest of the country isn’t on the same level of economic and social development.

“Entering a monetary block doesn’t imply a level of development only, but also of homogeneity of economy, society, which is something not very easy to achieve in a larger economy. In a Baltic country where most of the population leaves in the capital and one or two cities, the concentration is very high. If we limited ourselves to Bucharest and Ilfov, we would find a level of development similar to Lisbon or Berlin. Bucharest could integrate very easily in the euro zone, but 30 kilometers away from Bucharest there’s a wonderful place called Las Fierbinti, and 100 kilometers away we would find even less pleasant places, and they must integrate in the EU also, not just Bucharest“, Isarescu commented.

He believes integration is a very important political decision and he appreciates the political consensus regarding entering the euro zone in 2018, which is something the president and the prime-minister agree one.

“Romania is the among the last post-communist countries that haven’t entered the euro zone yet where the president and the prime-minister and the president mentioned it would be optimal to enter in 2018. It’s good we have a political consensus but we must be cautious about our ability to achieve this”, the BNR governor warned.

Isarescu offered the example of Greece, which hurried to enter the euro zone thinking only of the benefits, but at the first sign of crisis it encountered difficulties.

“Are we ready to do this? Could we accept economic growth, enter a corset that could at the same time allow us to move? Will we borrow cheaper or more expensive, like in the cases of Spain and Italy?”, the governor asked rhetorically.

Isarescu also believes that forcing the issue of adopting the euro is dangerous, and every single state must practice caution and focus on “get the household in order” before contributing to the expansion of the euro zone.

“As a message, I say we are looking at a positive tableau, but we must be supremely aware of what we have to do. It’s not just about ambition, it’s about coherence about what is ahead of us in the next few years. Let’s be ambitious and in the hear future reform our country”, Isarescu encouraged.