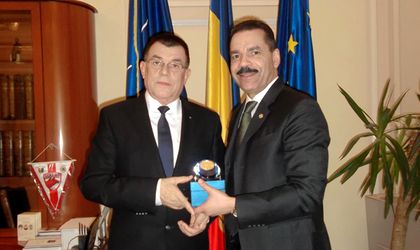 On January 24, the INTERPOL Secretary General Ronald K. Noble visited for the first time Romania, sustaining in the press conference that the country’s use of INTERPOL’s tools and services – one of the largest globally – stands as exemplary proof of its belief in the strength of international cooperation to combat crime.

The visit was made for marking 40 years since Romania rejoined the world police body. The INTERPOL Chief’s discussions with Minister of Interior, Radu Stroe and Inspector General of the Romanian Police, Petre Tobă, focused on the significant contributions made by Romania to secure the safety of its own citizens, the European Union, and of the world.

The INTERPOL Chief congratulated the Romanian police for their investigation and close cooperation with law enforcement in the Netherlands and officers at the Stolen Works of Art unit at THE INTERPOL General Secretariat headquarters in Lyon, which led to the arrest this week of three Romanians wanted in connection with the theft of paintings in Rotterdam in October last year. A Picasso, a Matisse and two Monets were among the seven paintings stolen from the Kunsthal Museum were.

Also, Noble highlighted the significant role played by Romania in European and international security through its ‘impressive’ use of INTERPOL’s global tools and services. In 2012 Romania consulted INTERPOL’s databases more than 19 million times – an average of 52,000 times every day – making the country the 12th largest user of the world police body’s databases out of its 190 member countries, and the seventh highest user in the European region.

Romania is also the fourth largest contributor to INTERPOL’s nominal database which contains details of known international criminals. These records generated more than 8,000 hits from searches conducted by other member countries – the third highest number globally – demonstrating how contributing to INTERPOL’s databases helps all countries locate and identify criminals.

The report presented figures some 7.5 million searches last year, Romania being the third largest user of INTERPOL’s Stolen Motor Vehicles database, obtaining the fifth highest number of hits by any country in 2012 alone.

“In an environment of complex changes in world politics, technology, escalating violence in different conflict zones or natural disasters, international police cooperation remains one of the major factors contributing to the fight against all types of crime and in building national and worldwide safety and stability,” said Inspector General Tobă, pointing to the cooperation with INTERPOL which in 2012 saw some 150,000 messages exchanged and more than 1,100 fugitives returned to Romania.

“Romania’s significant and extensive use of INTERPOL’s global databases, combined with its close collaboration with other member countries has already shown results, and creates an impact not only on the safety of its own citizens, but also on the security of the European Union and the world,” said INTERPOL Secretary General Noble.