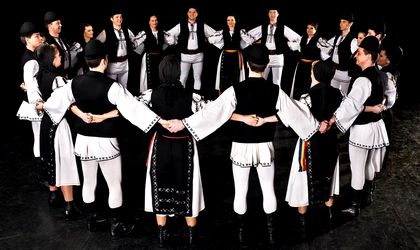 The 38th International Tourism Fair of Vienna will start on Thursday, January 10, and the ceremony will be opened by the oldest and most valuable professional folk ensemble of Romania, “Junii Sibiului.” This group is the oldest Romanian folk dance group, located in Hartibaciu Valley (Sibiu County, central Romania). The dancers of Sibiu, in traditional costumes of all the representative folkloric regions of Romania, will take the tourists on a musical journey through the Romanian folklore.

For this fair edition, the partner country is Romania and the star of Romania’s stand will be Sibiu, the only three-Michelin-star-city of Romania (since 2012) and the first city to have been European Capital of Culture, in 2007.

On the second day of the event, the public of the Tourism Fair of Vienna are welcomed to a Romanian traditional evening, at Romania’s stand, when not only the folklore, but also our traditional cuisine will be presented.

According to Agerpres newswire, the City Hall finds that the number of tourists is increasing in Sibiu, the increase in the hotel fee revenues last year standing as evidence. The tourist season peak in Sibiu is during the summer months, from June to August, included. The two tourists’ information centers of the Municipality of Sibiu have been visited by 26,000 tourists from 73 countries, most of them being German tourists, over 8,000, followed by almost as many Romanians.

Sibiu has an accommodation capacity of 4,000 places, in 135 hotels, motels and guesthouses, with an additional 430 restaurants, bars, pubs, wine cellars, were meals can be served.