Inflation rate down to to -1.7 pct following July price cut 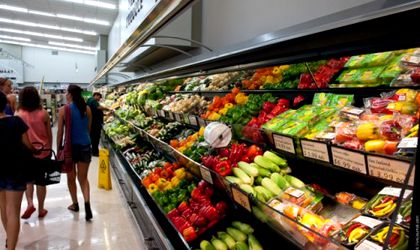 Consumer prices fell 0.2 percent in July compared to June, while the annual inflation rate fell to -1.7 percent, from -1.6 percent in June, show data from the National Institute for Statistics.

In July 2015, 40 percent of goods and services registered a price decrease year on year, while 34.5 percent of them had increases in the range of 0-2.5 percent. The rest of 25.5 percent recorder rises of over 2.5 percent.

Food prices fell 1.2 percent in July compared to June, while non-food prices were higher by 0.5 percent and services by 0.1 percent.

The greatest decrease in prices was registered by vegetables and canned vegetables, with 10.3 percent, followed by potatoes (down 8 percent), fresh fruit (down 3.9 percent) and fruit and tinned fruit (down 1 percent).

On the other hand, citrus and other southern fruit prices rose by 2.6 percent, eggs by 1.3 percent and margarine, beans and other legumes by 0.3 percent.

In non-food products, the largest price reductions were recorded for drugs, 3.5 percent, and medical products by 3.4 percent. Gas prices, however, went up by 11.2 percent. Other increases were also registered by laundry soap (0.2 percent) and electricity (0.1 percent).

Compared to December, food prices dropped in July by 7 percent, while non-food prices increased by 2.1 percent and services by 1.3 percent.

In June, consumer prices fell by almost 3 percent compared to May, due to lower VAT on food and beverages at 9 percent from  June 1 and the annual inflation rate came in negative territory at -1.6 percent for the first time in 25 years, influenced by cheaper food (prices dropped by 6.4 percent).

BNR Governor Mugur Isarescu said that the economy is not likely to deflate, given that inflation will stay negative in the upcoming three quarters, whereas consumption increased by 6 percent and may reach 10 percent by the end year, with inflationary pressures after wage growth.

The head of the central bank underlined that even though food prices were reduced due to the 9 percent VAT drop, inflationary pressures from non-food products and services can be observed, where prices increased.