“I had no idea when I wrote the piece that I would participate in a contest with it,” says composer Sebastian Andone 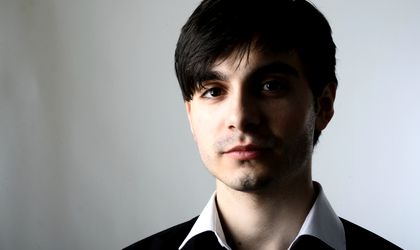 What does the contest mean to you?

Most of us, young musicians, grew up occasionally hearing Bartok’s famous statement: “Competitions are for horses, not artists.” Apparently, one of the most important composers in music history claims: either you’re an artist and you do not participate in competitions, or you’re an equine mammal whose only goal is getting awards, honors and diplomas! Despite this first impression, I dare to think Bartok wanted to emphasize the danger of mistaking temporary recognition (like winning a competition) for any of the higher artistic aspirations. His statement reveals total faith in the power of the authentic artistic act, which will surface through intrinsic forces without the need for a competition. It’s like saying, “Do not trust, absolutely, in any outcome of any competition; art has nothing to do with competition.”

Understood as such, I agree with Bartok’s statement. But I’m living in a world of over 7 billion people, of whom who knows how many are composers? Does this faith in the intrinsic artistic act empower me, the author of it? Does not this faith work also through me? Do I not owe to my own music to be the first and most ardent promoter of it without violating those principles that define and elevate the artist? Unfortunately, until now, no score came out of the drawer by itself or was placed on the desk of any conductor, especially during the composer’s life.

This is one of the meanings of George Enescu’s competition for me: one of the opportunities for a young composer to hear his or her music, which is not written for the competition itself, nor for recognition or success and not even to hear one’s own music performed by the Philharmonic, but rather out of passion and an ontological necessity. I had no idea when I wrote the piece that I would participate in a contest with it. Another meaning is related to the previous editions, to those who have won this competition, whom I relate to with admiration and respect: Dan Dediu and Diana Rotaru. Since receiving this award, I consider each mark I make on a score as my responsibility to the two renowned composers.

There are giant performers, conductors and composers who did not participate in competitions, but there are also those who have done so, just as famous as the other ones. So it is not necessary to participate in competitions, but there is no harm, as we see. The contest is primarily a means of imposing (self)mobilization and raising one’s standards and propensity for (self-)knowledge. You can stay home with your art, never knowing if it would survive time. However, even recognition of your art by winning a contest does not ensure its survival/consecration. This is the reason why I mentioned “temporary” recognition. I believe that any competition must be viewed as a means of “achieving” quality music, not diplomas and prizes. The results are only approximate consequences, never absolute. I do not think a competition generates absolute “values”.

I think all great composers would want good music to be disseminated, especially in their home country. However, I am unable to answer this question further. I can only add that I have met many young composers from around the globe who regard this contest with great respect and reverence, giving them confidence and thus confirming its reputation.