How new can Bucharest’s Old City get? 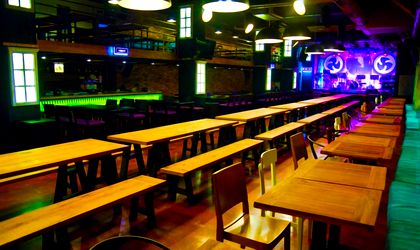 In the past year, the authorities have completed the refurbishment of Bucharest’s historic core, the Old City, turning it into a walkable quarter with distractions to keep you occupied by day and enough bars and clubs to ensure you don’t go to sleep early. Maintaining and improving the Old City is still a challenge for both the public and private sector, but expectations are rising from the network of small streets that host bars, restaurants and commercial spaces. BR found out what’s next for the businesses in the Lipscani area.
By Oana Vasiliu
Between 2007 and 2011, the Old City was effectively a no-go zone, with minimal street lighting and gaping holes in the pavements, papered over by unstable plywood bridges. But now specialists from the real estate company Colliers International claim in a new study that in two-three years the zone will be a commercial one. The trend has been started by Swedish company H&M, which has chosen the area for its first local high-street location, a total surface of 1,500 sqm that will also include the H&M Home collection. This is a first for H&M on the Romanian market, where so far only the retailer’s clothes collections have been on sale.
In 2010, there were around 80 pubs in the historical center. By 2011, an analysis of the market put the figure at 110. A year later, in 2012, the number was estimated to have grown by 36 percent, though this year it returned to the 2011 level, according to Ziarul Financiar.
Currently, Bucharest’s Old Town covers an area of ​​57 hectares, of which Lipscani Street occupies about 15 hectares. A total of 527 buildings – of which about one third are clustered in the Lipscani area – occupy the space delineated by six major roads: Regina Elisabeta and Carol Boulevards to the north, Hristo Botev Boulevard to the east, Calea Victoriei to the west and Splaiul Independentei and Coposu Boulevard to the south. Half of these buildings were built before 1900, and the other half before 1940.
Despite the rumors, owners of pubs in the neighborhood said that the City Hall is making efforts to help them obtain authorizations for the consolidation of the buildings and even to speed up the process. In July, a wall connecting two derelict buildings in Bucharest’s Old Town collapsed, though fortunately no one was hurt, as a police team had managed to close the street just before the wall fell. This came soon after another building gave way in the Old Town in May, again with no casualties. The remains of that building are still to be found on the street, and the area has been secured with police yellow tape. After the incident, Bucharest mayor Sorin Oprescu said he would ask the prime minister to change the law to allow the authorities to expropriate buildings that are left derelict and which could present a danger to the public. Many other structures in the Old Town are in a similar condition, despite the recent improvements in the area, which has become the number one restaurant and nightlife hub in Bucharest. Since the demolition of historic buildings is not allowed, owners prefer to let structures fall apart by themselves, before building something else on the land.

Lipscani currently hosts 51 buildings that contain commercial premises within an area of about 19,000 square meters, but 11 of them require serious investment in renovation or rebuilding, according to the Colliers study. Among the brands that have stores in malls, the Lipscani area is home to Adidas, Lash and Pente, and other national and international fashion retailers have said they intend to invest in the district. Rents in the area start at EUR 45-50 sqm/month for non-refurbished buildings and can reach EUR 70/sqm for renovated ones, while basements or upper floors can cost 30-70 percent less than ground floor premises, according to Colliers.

The cost of the facelift

In his trilingual book on Lipscani, Eugen Istodor wrote of the main street of the Old Center, “It looks like a theatre setting, ready for a party which is always postponed: vintage scenery, wedding dresses, easy drugs, easy lovers, cheap and colorful gifts, antiques, crazy bicycles, all sorts of tea, ecological, organic, shawarma/kebab, mussels, narghiles, eccentricities, cool, small talk, euphoria, parties, drunk men, funny, takeaways, pubs and taverns for all pockets, but also an earthquake waiting around the corner, ready to turn everything to dust.” This began to change this summer, when iconic inn Caru’ cu bere started the reconstruction of its façade, an investment estimated at EUR 1.5 million. Opened in 1879, this historic landmark is one of the few venues in Bucharest preserved as such, with architecture that reminds visitors why Bucharest was once dubbed the “little Paris”. Distinctive elements include the murals, stained glass and carved cross-beams. In 1879, the restaurant attracted international political and literary personalities such as Henry Wadsworth, I.L. Caragiale and Octavian Goga. Today, the restaurant serves about 2,000 customers per day, of whom 80 percent are foreigners. The location has 500 covers (indoor and outdoor) and finished last year with a turnover of EUR 6.5 million.

Between the old and unstable buildings of the Old City, a brand new one has sprung up on Selari Street, consisting of office space and two pubs, Academia de Biliard and RE:public. The investment in the beerhouse RE:public was EUR 1 million, according to Bebi Oprea, the operational and development director of Mundis Manangement Group. The location hosts two different leisure concepts, a brasserie on the grand floor and beerhouse in the basement, on almost 800 sqm. The capacity is 500 seats and 1,000 standing. “We all know that consumers who come to the Old City don’t spend too much money on food and beverages, but if you come with a concept that brings entertainment and high-quality products, then you can tap into a niche market. Here, we bring experience in beer, food and music – the band performs live every weekend,” Oprea told BR. Asked how the first weekend after the grand opening went, the manager responded that in two-three months the pub will reach maturity, as the first weekend brought in almost 300 clients, a very good start for a new business in the area.