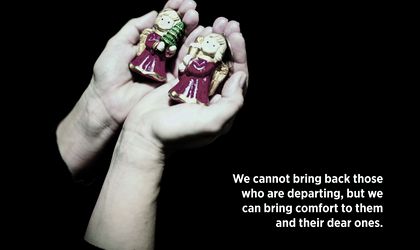 Hospice Casa Sperantei has started its fundraising campaign aimed at the companies that will pay corporate income tax liability this year. These companies can direct, with no additional cost, up to 20 percent of the tax to support humanitarian causes using a law that has been in effect for 21 years but is still not known and used by Romanian businesses. Hospice will use the funds collected for the palliative care of patients affected by an incurable illness.

In the 2014 campaign, Hospice collected RON 1,618,972 from 188 companies, a 59 percent increase compared with the previous year. With the funds that we aim to collect this year we will be able to offer 6,000 free palliative care home visits, 4,000 days of admission in the organization’s inpatient units in Brasov and Bucharest and 3,000 day center activities.

According to the 32/1994 law regarding sponsorship, companies can direct up to 20 percent of the corporate income tax liability to nongovernmental organizations, in a 0.3 percent annual turnover limit, a limit that will be increased to 0.5 percent in 2016. Only 21 percent of the companies that registered a profit in 2014 used this law to fund NGOs, according to data provided to Hospice by the fiscal authorities. The companies can direct the funds without additional costs by the end of the year. The required forms and more info can be found at 20.hospice.ro. The total sum directed in 2014 by the companies was RON 554 million. An analysis made by Hospice showed that the total sum that could potentially be directed in 2015 towards NGOs could reach the equivalent of EUR 318 million. A third of this sum would cover the costs for building and equipping 16 palliative care centers in Romania that could care for 32,000 patients over a 12 months period.

Hospice Casa Sperantei, a non-profit organization established in 1992 in Brasov, introduced the concept of palliative care in Romania. Hospice is the biggest NGO nationwide that offers free palliative care.

The NGO has two medical centers in Brasov and Bucharest for the care of adults and children diagnosed with incurable illnesses. Hospice developed complete palliative care services offered in day centers, ambulatory centers and its own admission units, at the patients’ homes and in partner hospitals.

Hospice Casa Sperantei develops palliative care nationwide and internationally by information sessions, educational programs dedicated to professionals, patients and to the community and also by actions for improving legislation.