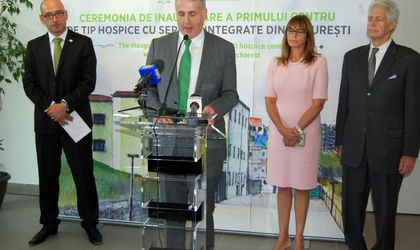 After a EUR 5.7 mln investment, Hospice Casa Sperantei has a new palliative care center, opened in Bucharest, in District 2. In 2009, Norfolk Duchess has made the first call to donate for this center, an approached also sustained by Marina Sturdza and HIRH Dominic von Habsburg, among other donors, patrons, sponsors and founder members.

“I really do think that today is a day of great celebration and I think is a miracle that here we are. I imagine how much work and how many obstacles must have been emerged to open this center, but I want to congratulate everyone because it was a team-work. I believe that this Hospice will increasingly become strong and I also imagine how many people will help over the years”, said in the opening speech the Norfolk Duchess, who is the patron of Hospice Casa Sperantei for twenty years now.

According to Hospice Casa Sperantei information, over 5000 people are dying of cancer every year in Bucharest, whereas only 9 percent of people with cancer have access to free palliative care in the capital. Same report shows that more than 15,000 patients need annually this service in Bucharest and surrounding areas.

“It’s true there is a great tradition which certainly started with my grand mother, Queen Maria, who was a nurse, and went to the frontline and took care of those soldiers from both sides of the line. She also founded several hospitals in Romania. (…) Ileana, my mother, opened her doors for the Romanian soldiers when she was living in Austria, turning her house into a hospital. She knew it wasn’t enough, so she returned to Romania and built another hospital in Bran. (…) For me, the great meaning of this Hospice hospital is a continuation of what both these two great women have done before”, added HIRH Dominic von Habsburg.

The new center has three floors and 3421 sqm, being the first and the only palliative care center with integrated services in Bucharest, offering free support for children and adults who suffer from incurable diseases. The center has home care services, ambulatory care, hospital admissions, social services and psycho-emotional counseling.

Annually, the Bucharest center can accommodate 2,000 patients, while the Hospice Casa Sperantei team can perform 11,000 home care visits and over 8,000 ambulatory consultations can be made. Moreover, 5,000 visits can take place in the center to benefit from the recreational activities that the center provides.

For this to happen, the Bucharest center needs EUR 390,000 to fully function for a period of nine months. The center includes two units, one for adults and another for children, with 23 beds which can accommodate 700 admissions for one year.