Honeywell to invest EUR 57 million in Ploiesti plant by 2015 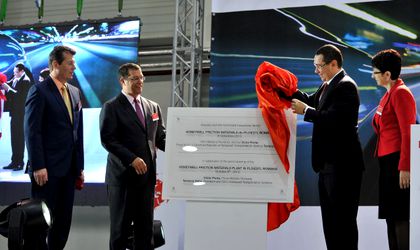 Rainer Bostel, president of the frictions materials division at Honeywell, said the company aims to invest EUR 57 million in the plant, located in the Ploiesti West Park, by 2015.

The company secured EUR 16 million in state aid from the government that will be disbursed based on the investment pace.

“Romania plans to maintain a predictable and stable economical and fiscal framework. Further changes, and the ones made in the past year, aim to encourage investments mainly in research and innovation,” said prime minister Ponta during the inauguration event.

Honeywell plans to ramp up its production of brake pads to more than 10 million yearly in its Ploiesti plant. Up to now the company exported most of its output to Europe, China and Mexico.

“Honeywell has enjoyed success in Romania for more than 15 years. The addition of this Friction facility to our existing turbocharger plant in Bucharest – which is our largest turbo plant in the world – is feeding the growth strategies of Honeywell Transportation Systems within the region and around the world,” said Terrence Hahn, president and CEO of Honeywell Transportation Systems.

The US company employs more than 2,200 people in Romania in the Transportation Systems turbo plant and in the Automation and Control Solutions strategic business group. The group has enhanced research and development activities in Romania, boosting its local engineering arm.

Honeywell currently has 220 employees in Ploiesti, planning to increase the headcount to 300 in the next two years.

IT Genetics expands its operations in Western Europe by opening a new office...