Historical moment Prague August 1968 to be exhibited in Bucharest 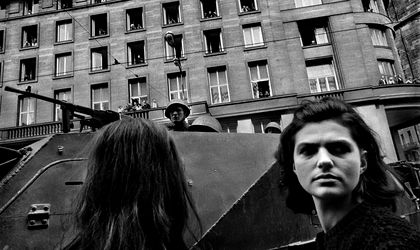 For the first time in Bucharest, the well-known photographer Josef Koudelka will present Invasion 68 Prague, an exhibition that presents the historical moments of August 1968.

During those days, the thirty years old photographer realised a series of photos, which he later managed to take out of the country, when he immigrated to France. The photos were published by Magnum Photos agency one year later, in 1969, in many international magazines, on the occasion of the first anniversary of the invasion, without the author’s name. In the same year, Koudelka was honored with “the Czech anonymous photographer” award with Robert Capa golden medal from Overseas Press Club. Josef Koudelka, one of the most prominent contemporary photographers in the world, has been recognized as the author of the photographs only in 1985, after his father, who was still in Czechoslovakia, died.

“This exhibition is about the invasion in which Romania was the only Warsaw Pact country that refused to participate. Plus, there is also a personal memory that connects me to Romania – I was here many times and I love this country,” Josef Koudelka said.

The exhibition is made by the Czech Centre Bucharest in collaboration with the French Institute in Romania. The opening will take place on October 16 at 7 p.m. at Annex MNAC (Calea Mosilor no. 62-68, 3rd floor), in the presence of the artist.