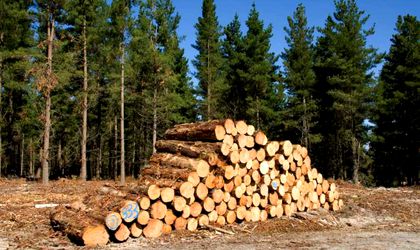 Timber prices have increased in Romania over the past years to the point that producers consider them to be among the highest in Europe at the moment, said industry representatives at a press conference organized by the Romanian Association of Furniture Producers (APMAR).

A regulation from RNP Romsilva, the Romanian Forestry Agency, has led to an increase in starting prices at the auctions they organized in December 2015, and sparked fear among producers of the worst forestry crisis “in 25 years”, as stated by Aurica Sereny, president of the Romanian Association of Furniture Producers.

The fact that at the moment prices for Romanian timber are among the highest in Europe “leads to a competitiveness crisis of the entire wood processing industry, including the furniture industry”, according to information from the press conference. “This is an industry dependent on a natural resource made available by Romsilva. The furniture industry can absorb a 2-3 percent increase in the price of timber, but in the current environment where the price of timber entering a factory for manufacturing is doubled, or tripled in certain cases, this increase means 30-40 percent over the current prices contracted on the internal markets”, detailed Mihai Apopei, vice-president of the Romanian Commerce and Industry Chamber.

For furniture producers this means that the “main problem with the price of wood mass is that, simply put, we lose our competitiveness in the face of surrounding countries. Our clients don’t understand and can’t justify these prices when all the other providers around us are not asking for a higher price,” said Marius Giurgiu, general director at Sortilemn Gherla, a Romanian furniture producer with a yearly turnover of EUR 60 million, focused primarily on exports.

Rodica Chivulescu, general director of Ronex, a Bucharest-based furniture production company, also pointed out how the systematic increase of prices over the years affected her business. “Though initially export-oriented, I had to lower the quantity geared towards exports because we could no longer match the prices demanded by our clients”, she said.

Between 17-24 December 2015, RNP Romsilva, the Romanian Forestry Agency, organized the main auctions for wood for the 2016 production year, offering a total volume of 4.31 million m3 of which only 5 percent was sold, according to data presented at the conference. RNP Romsilva rescheduled the auctions for 12-25 January 2016, but “last week, nothing was sold in Botosani, yesterday there were auctions in Alba and Vrancea, where under 20 percent of the total volume of wood on sale was sold,” stated Apopei.

The reason given at the conference for the stunted auction results is the too high prices decided on by RNP Romsilva. Following the entrance into force of HG 924/11.11.2015 regarding the capitalizing on the wooden mass that makes up the public property of the state, RNP Romsilva issued decision no. 691/12.11.2015 regarding the market level of reference prices used in establishing the starting price meant to be used at the December auctions, according to a press release from ASFOR. “The exaggerated starting prices at auctions have lead, largely, to economic agents being unable to make offers, this further exacerbated by the fact that the wood bark is calculated at the same price, even though, as reference value, it is over 100 times cheaper (1-2 RON/m3),” said Nicolae Tucunel, president of ASFOR.

Given the international environment where prices for raw materials on the global market have gone down, from the price of oil, gas, wood, metals, etc., representatives of various associations and furniture production companies, including Tucunel, believe that the RNP Romsilva increase in auction starting prices is “unjustified”. “To exit this crisis, the RNP Romsilva general director’s 691/2015 decision has to be annulled and a new decision emitted that is adapted to the conditions of the local and international market”, said Tucunel, an opinion echoed by the other participants of the conference, including Sereny.