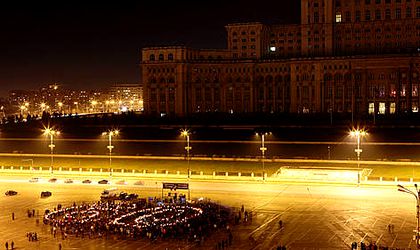 People and companies have the chance to do something for Planet Earth on Saturday, March 29, when it’s lights out for the yearly edition of the international renowned event, Earth Hour. For Romania, light bulbs and neon lights around the country will be shut off starting with 20.30, lasting for an hour until 21.30.

Around the globe, over 150 countries respect and celebrate Earth Hour, making it one of the biggest environment-friendly initiatives in the history of mankind, created in 2007 in Australia as a way to draw awareness for the planet’s various ecological problems, starting with Global Warming.

In Romania, Earth Hour is a widespread initiative dating back to 2009 when WWF decided to invite Romanians to take a step back and reflect on how to make our living more sustainable.

More and more Romanians join Earth Hour each year by turning off the lights and making commitments to change their habits. NGOs, companies, educational, cultural and arts institutions organise themed events and local campaigns to spread the cause.

In Bucharest, lighting will be shutdown at the Palace of Parliament, the Arch of Triumph and the Romanian Atheneum. WWF-Romania and its partners will organise special events in Carol Park starting at 20.00, which include unplugged concerts from Sistem and the Muse Quartet.

In Sibiu, people have been asked to gather downtown in the Piata Mare (Large Square) at 20:30, and bring jars and candles, to provide natural lighting to the area, when public lighting will turn off.

In Oradea, the Town Hall and the Regina Maria Theatre are among the most famous landmarks that will be shrouded in darkness. The authorities have also planned a military parade that will march from the theater to Piata Unirii between 20.00 and 20.20.

Downtown Targoviste will have plenty of light, but not from public street lighting. The authorities promise a wonderful light show when thousands of Chinese lanterns will be launched in the air.

Companies and corporations are always welcomed  to join the movement.  One of the biggest supporters in Romania is Rompetrol, who announced on Friday that it will turn off the lights throughout its chain of gas stations.

“Out of respect for the environment that we live in and where we carry out our operations, we support this international initiative to raise awareness for climate issues. Following this train of thought, we recommend to all our partners but also to the international community to discover new ways to contribute to the environment’s welfare and conservation”, according to Alexey Golovin, managing director Corporate Development & Communication – Rompetrol.