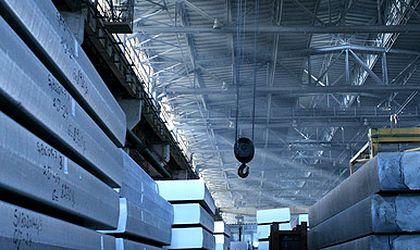 The biggest electricity consumers in Romania, aluminum smelter Alro Slatina and steel plant ArcelorMittal Galati, will have to spend RON 177 million (EUR 39 million) to comply with the green power certificate purchase requirements for 2013, 50% more than in 2012.

Although the unitary price of a certificate has dropped in 2013 as a result of an excess of offers on the market, ANRE doubled the quota compared to 2012.

Green certificates are emitted by renewable energy producers and then bought by electricity suppliers, which have to meet an annual purchase quota, set by ANRE. The 2013 quota suffered a series of adjustments and is now set at 0.224 certificates per MWh of energy delivered (0.116 MWh / certificate in 2012).

“Several new power plants were qualified by the end of 2013 and ANRE had to increase its estimates regarding acquisition quotas. The final updated version was settled on very late, at the end of February, in absence of data regarding consumption in Romania”, according to a market source quoted by zf.ro.

Therefore, for a consumption of 3 TWh (6 pct of national consumption), Alro will need 670.548 green certificates in order to fulfill its requirements for 2013. In 2012, the aluminium producer was required to buy 367,037 units, at a similar consumption rate.

Romania comes in 8th for renweable energy use in Europe

Although the quota was doubled to include a higher production of renewable energy, green certificate prices are under pressure on account of the overflow of energy. The average price for a unit has dropped to RON 190, given that in 2012 they were marketed at RON 244 / unit.

“The price has dropped since there are a lot more producers of solar energy which entered the market in 2013. There were mostly wind parks by summer last year. The renewable energy law has has given the solar energy segment a boost”, according to the same source.

Alro previously said it may survive on the market only for a few more months if the government does not reduce the level of ecotaxes payable by big industrial consumers.

Gheorghe Dobra, Alro’s general manager, said last week the company was working on different scenarios to cut production this year, which may include the closure of one power-hungry asset. He added that the firm was losing USD 15,000 every hour.

“Romania still has the most generous support scheme for renewable energy and we cannot transfer these costs to buyers because we are part of a global market,” said Dobra.

Steel maker ArcelorMittal aims to cut energy consumption by 15 percent at its unit in Galati, in the next five years, as part of an effort to rein in energy costs.

The company said it had invested almost EUR 800 million in modernizing the production units and upgrading the technology, in the last decade, leading to reduced consumption of specific resources in the production chain.