Greece on the brink – an analysis of the Greek crisis (1) 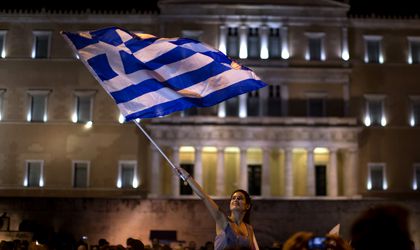 With total debt of over EUR 320 billion, of which 65 percent is to Eurozone and the IMF and 8.7 percent to the European Central Bank (ECB), Greece was teetering on the edge of bankruptcy and default before a last-minute agreement by EU leaders. While member states and international financial institutions try to find a way to avoid a so-called “Grexit”, Greece is being pressed to undertake deep economic reform.

This is not the first time when Greece has faced such a big challenge. Existing market data indicate that the Greek economy was in technical default back in 2012, restructuring a sovereign debt of over EUR 120 billion. The difference is that that time it was saved by its European creditors.

Recently, White House spokesman Josh Earnest said that it was in “the collective interests” of Europe and the United States that Greece reached a new bailout deal with its lenders, with Athens agreeing to “a package of reforms”. President Obama also spoke to President Francois Hollande of France regarding the latest developments in Greece and their impact on the whole Eurozone. “The two leaders agreed on the importance of finding a path forward that will allow Greece to resume reforms and return to growth and sustainability within the Eurozone, recognizing that this will require difficult compromises from all sides,” said White House officials.

In a July 5 referendum, voters rejected the terms of an international bailout. Figures published by the Interior Ministry indicated 61 percent voted “no”, and 39 percent “yes”. Some European officials had said that a “no” vote would be seen as an outright rejection of talks with creditors. But Greek government officials insisted it would strengthen their hand and that they could rapidly strike a deal for fresh funding in resumed negotiations.

Speaking before Greece and EU leaders struck a new deal on 13 July, Hari Tsoukas, professor of Organizational Studies in Athens at Warwick Business School, said, “The recent referendum in Greece has made it difficult for PM Alexis Tsipras to compromise with creditors. If he really wanted a better deal for Greece, he should never have called the referendum in the first place. Now, for his proposals to form a sound basis for negotiations with creditors, who narrow-mindedly stick to harsh austerity, demanding unrealistic primary surpluses and refusing to seriously consider debt relief, Tsipras needs to accept austerity, especially if a commitment to debt relief is given to him. But austerity is what Greek voters emphatically rejected. He has imprisoned himself in a paradoxical situation.”

Most markets around the world, including those in Europe, fell because of the financial uncertainty created by the Greek vote. In addition, international financial markets consider Greece an insolvent economy.

Tsoukas added, “Greece is on its way out of the Eurozone and maybe of the European Union. Trusting Tsipras’s assurances, Greeks overwhelmingly voted for two contradictory choices in last week’s referendum: against austerity and for Greek membership of the Eurozone. However, the two parts of this mandate, rightly or wrongly, have turned out to be incompatible.”

He went on, “Membership of the Euro demands sacrifices like austerity and structural reform – for an uncompetitive economy operating in a badly designed single currency with no common fiscal policies, nor common political institutions. Excruciating austerity made the Greeks identify the Euro with economic misery, while the political system and organized interests have either opposed or at best grudgingly accepted reforming a clientelist state (one rife with the exchange of goods or services for political support and a protectionist economy). All along, both Greece and its creditors have refused to see the big picture – the protection of the Eurozone.”

The International Monetary Fund (IMF) said recently that it was prepared to work with Athens and its European creditors to help resolve Greece’s debt crisis now that a conditional agreement has been reached on a new bailout. Spokesman Gerry Rice said the fund’s managing director, Christine Lagarde, had briefed the global lender’s board on the outcome of the latest talks. “The IMF stands ready to work with the Greek authorities and the European partners to help move this important effort forward,” he said in a brief statement.

According to the IMF country report released on July 14, Greece’s public debt has become highly unsustainable. This is due to the easing of policies during the last year, with the recent deterioration in the domestic macroeconomic and financial environment because of the closure of the banking system adding significantly to the adverse dynamics. The report shows that financing needs through to end-2018 are now estimated at EUR 85 billion and debt is expected to peak at close to 200 percent of GDP in the next two years, provided that there is an early agreement on a program. Greece’s debt can now only be made sustainable through debt relief measures that go far beyond what Europe has been willing to consider so far, according to the IMF.

The crisis has deterred holidaymakers, according to the Hellenic Association of Tourism Companies (SETE). SETE chief Andreas Andreadis announced earlier this month that hotel reservations were down by 50,000 daily. There has also been a wave of booking cancellations since July 27, while Greeks are making almost no reservations. If things do not improve, this is expected to deal a strong blow to the local tourism market. Flight reservations are also down by almost 50 percent.

As for Romanians, most of their holidays to Greece are packages, including prepaid services – transportation, accommodation, transfers, guides, meals in the half board or all inclusive system. Local Romanian travel agency Paralela 45 has set up some fallback options for tourists, providing them with an emergency phone number, agency representatives in holiday destinations, as well as financial support should issues arise. In addition, the agency advises tourists to have cash on them – about EUR 100 per day for a family of four. The Romanian Ministry of Foreign Affairs also warned tourists going to Greece they should take cash, due to the closure of the banks and cash controls by the Greek state.

[This is part of a longer story. Next part is available here]