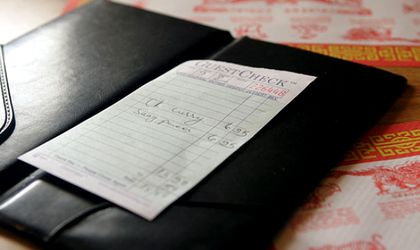 The government decided to legislate the tip, which will be printed on a separate tax receipt, the decision taken through an emergency ordinance approved on Wednesday to be applied starting with the date of publication in the Official Gazette, reports Mediafax.

The tip is any amount of money offered voluntarily by the customer, in addition to the value of the goods delivered or of the services rendered by the economic operators and to the change to be received by the customer which is voluntarily left. Tipping cannot be considered a supply of goods or provision of services, says the Emergency Ordinance draft.

It is forbidden to firms to condition, in any form, the supply of goods or the provision of services by receiving tips. The supplementary proceeds, fiscally recorded, will be included on a distinct tax receipt.

The companies decide, through a regulation of procedure, whether the revenues coming from tip collection are used by them or the tips are distributed to employees.

The tip taxation applies as to a profit gained by the economic operator in case it is not distributed to employees and can be of 16 percent or 3 percent in case micro companies, while the employees receiving the tips will be taxed with 16 percent.