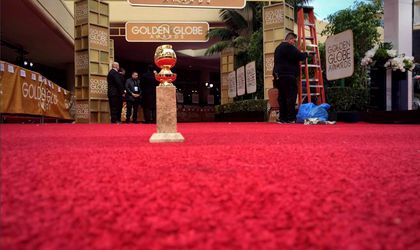 The Revenant, directed by de Alejandro González Iñárritu and The Martian, directed by Ridley Scott, were the big winners at the 73rd gala of Golden Globes, which took place last night in Los Angeles, USA. The event was hosted by the British actor Ricky Gervais, marking his fourth time heading the Golden Globe Awards.

The Golden Globes are organized by the Hollywood Foreign Press Association, are the first major film honors of the Hollywood awards season that culminates with the Oscars on February 28.

“This is the most difficult journey I’ve embarked on,” said Inarritu, who last year won directing and best picture Oscars for Birdman. Leonardo DiCaprio, who still didn’t yet win an Oscar, received a standing ovation and said he shared his award with indigenous people around the world.“It is time that we heard your voice and protected this planet for future generations,” the actor, an environmental activist, said, quoted by Reuters newswire.

Jennifer Lawrence’s role as Joy Mangano in David O. Russell’s Joy has won the actress her third Golden Globe award. “Everytime I’m up here, it’s because of you,” Lawrence said of Russell in her acceptance speech. Lawrence and Russell continue to be an awards power couple, notes Entertainement Weekly. Both of Lawrence’s previous wins also came from Russell-directed movies, for Silver Linings Handbook and American Hustle.

Next in line, Matt Damon, who took home a Golden Globe on Sunday night for his role in The Martian, said in his acceptance speech for Best Actor in a Comedy or Musical that “I’ve made a lot of movies that people just didn’t go see. So to make one that everyone enjoyed this much…”

Also, the best foreign language movie was Son of Saul, the Hungarian movie was included on many critics’ year-end lists and for some time was considered a potential Best Picture Oscar nominee. It tells the story of a Jewish man working in Auschwitz who believes that he’s found the remains of his son and intends to give the boy a proper burial. It was the first Golden Globe win for a film from Hungry, as pointed out by Helen Mirren while announcing the award, notes Entertainement Weekly. The movie screens also the Romanian actor Levente Molnár, who plays the role of Abraham Warsawski, the closest friend of the main character, Saul.

Below are listed all the winners:

Best Animated Feature Film: Inside Out

Best Actor in a Motion Picture, Musical or Comedy: Matt Damon, The Martian

Best Actor in a Limited-Series or TV Movie: Oscar Isaac, Show Me a Hero