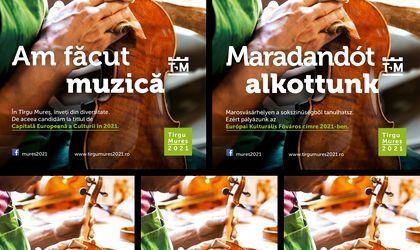 The strategy proposed by GMP Advertising aims to position Targu Mures as the city one can learn from and that can create a participative touristic experience for the 2021 visitors. Campaign’s slogan, “Made in Targu Mures”, aims to illustrate the cultural activities Europeans will learn live, from the inhabitants of the city.

“Inspired by the excellence model the tower offered in medicine via SMURD (Mobile Emergency Service for Resuscitation and Extrication), the Medicine University and the Cardiology department within the County Hospital, we realized that the same top level can be achieved also in the cultural field. The biggest treasure Targu Mures has are the people and this is how we came up with the idea of involving them in order to offer to the visitors an unique experience, of learning the culture directly from local communities,” said Dana Pascu, senior strategic planner at GMP Advertising.

Targu Mures intends to be more than a simple exhibition of cultural acts and to actually become the place where the visitors participate and learn by experiencing the habits, culture, ethnics and traditions the city has and then relay them forward in the world.

“We looked to differentiate and we chose to build together with the inhabitants the program for 2021. Targu Mures gains more than a promo campaign, it gets a vision for its own future that it can decline no matter the result of the competition,” also added Dana Pascu.

The campaign includes two stages, one during which the future teachers (those to have an active role in 2021 and which will offer to the tourists the option to participate) will be recruited and  a second one consisting in a campaign informing the inhabitants of the county regarding the opportunity for Targu Mures to become European Cultural Capital. The candidacy file will be officially submitted on October 10th, with the judging process involving a preselection in December 2015 and a final selection in September 2016.