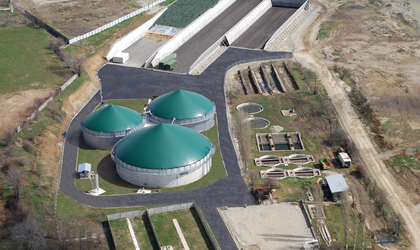 Genesis Biopartner comprises Romania’s Baupartner Group – a construction company- and Sweden’s Vireo Energy – a bioenergy producer.  The plant, which is located in Filipestii de Padure locality, Prahova County, has a 1MW capacity for electricity generation and 1.2MW for thermal energy.

Michael Dietrich, Genesis Biopartner founder, said: “We have proposed to set up a network of at least 10 biogas cogeneration plants in the next 3 to 4 year.” At present, the holding is looking to seal deals with partners that can supply organic waste and companies that can use biogas, in view of the development program.

Under the current renewable support scheme, the project will be granted three green certificates for each megawatt in generates.

Genesis Biopartner will supply the thermal energy output to a meat processing plant owned by CrisTim Group. This has allowed the plant to lower its costs with the technological steam by around 25 percent, according to Radu Timis, CrisTim Group president.

The plant processes 49 tons of organic matter daily, which is generated from the nearby agricultural fields. The holding plans to further include the waste from CrisTim’s plant in the production chain.

AB Energy supplied the equipment for the cogeneration installations, while the MT Energie provided the fermentation technology and designed the automatization of the biogas production chain.

Romania has little over 40MW of incentivized biomass projects, out of which less than 5MW are biogas plants, according to data published by grid operator Transelectrica.