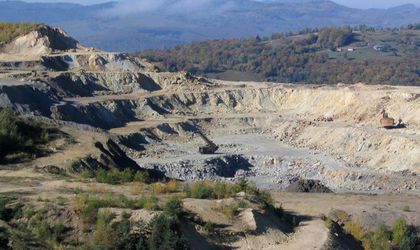 Plans for the development of the largest gold mine in Europe hit a wall in Parliament last week, after PM Victor Ponta urged MPs to reject a draft mining bill giving the go-ahead to open pit mining in Rosia Montana, citing insufficient political support, amid a wave of protests across the country and beyond.

Gabriel Resources – the Canada-listed company seeking to mine gold and silver in Rosia Montana – said it would consider starting “litigation for multiple breaches of international investment treaties,” if the bill were killed in Parliament.

“If the lower house does reject the project, we will go ahead with formal notification to commence litigation for multiple breaches of international investment treaties for up to USD 4 billion,” Jonathan Henry, CEO of Gabriel Resources, told the Canadian daily Globe and Mail. “Our case is very strong and we will make it very public that Romania’s effort to attract foreign investment will suffer greatly.”

Keith Hulley, chairman of the board of Gabriel Resources, later made a statement claiming that Henry had been misquoted in the interview, retracting the EUR 4 billion lawsuit figure. He added that he respects the Romanian people and its institutions – government and Parliament.

“We will acknowledge any decision taken by the Romanian government or Parliament concerning Rosia Montana, a project in which we have invested millions of dollars and we have worked with your country to design to the highest international standards for the benefit of the people of Romania. The company will provide all information necessary in support of a considered Parliamentary review of the merits of the project so that people will be able to make an informed decision, in the knowledge that the ultimate and final decision will remain with the Romanian government and Parliament, on behalf of the Romanian people,” said Hulley.

Dragos Tanase, general director at RMGC, said last Wednesday the state would end up paying “several billions in compensation” if the project was rejected. He added the company invested USD 600 million locally.

Gabriel Resources has been trying to start the project, located in the Apuseni Mountains in west-central Romania, near the village of Rosia Montana, for 16 years. The company’s response came shortly after PM Ponta declared the mining project “closed”. He urged MPs to reject it after Crin Antonescu, his political partner in the center-left ruling coalition, the USL, and head of the liberal party, said he opposed it.

Ponta’s comment sent the company’s shares down 60 percent, but the litigation threat saw them recover 18.5 percent in early Wednesday trading, leaving a market cap of USD 296 million, according to stockhouse.com. Some of the firm’s biggest shareholders include Baupost Group, a hedge fund run by American billionaire Seth Klarman, and Newmont, one of the largest gold miners in the US.

Antonescu, who is president of the Senate and a possible candidate in next year’s presidential elections, said the project divided Romanian society. Opposition leader Vasile Blaga also called on the PM to drop the bill.

The bill was voted down unanimously by the legal commission in the Senate, which declared it unconstitutional. Members of the public administration, territorial organization and environmental protection commissions took a similar stance and an economic commission was also expected to give an opinion. MPs in the higher chamber of Parliament were due to vote on the bill late last week. The Chamber of Deputies will have the final vote. The draft mining bill reached Parliament on September 5, after being passed by the government one week earlier.

“We have negotiated, fundamentally changed the negotiation data, the environmental protection, the cultural and economic interest,” commented PM Ponta upon approval of the draft bill.

In the bill, Gabriel Resources agreed to increase the government’s stake in Rosia Montana Gold Corporation (RMGC), the mining firm set up for the project, to 25 percent. In addition, mining royalties were hiked from four to six percent with the option for the state to request payment in gold bullion. Furthermore, the mining project was declared as being one of public utility and overriding national public interest.

In an investment program published this July, the government named the natural resources sector as one of the key drivers in helping Romania attract EUR 10 billion worth of FDI inflows and create 50,000 jobs this year.

The Rosia Montana project made the list along with the gold exploration project of Eldorado Gold, a Canada-based miner, and the exploration of shale gas by US oil major Chevron.

According to the draft bill, around USD 2.3 billion will go into the state coffers during the 16-year life of the mine at Rosia Montana, based a long-term gold price of USD 1,200. The company says it will create 2,300 jobs in the construction and 900 in the operational phase of the mine. Mining in Rosia Montana is envisaged to start in late 2016, if the bill is passed by Parliament and secures all the necessary approvals, including an environmental permit.

A wave of protests has swept the country in the past ten days, with members of the public expressing their anger at the government’s decision to approve the mining bill. Thousands of people took to the streets in Bucharest and other major cities in Romania and abroad, demanding the project be halted.

As BR went to press, 22 miners had blockaded themselves in an abandoned mine in Rosia Montana, threatening to go on hunger strike unless Antonescu visited them. Others miners protested on the surface, calling for the start of mining operations in Rosia Montana.