Former US ambassador Gitenstein to sit on Property Fund board 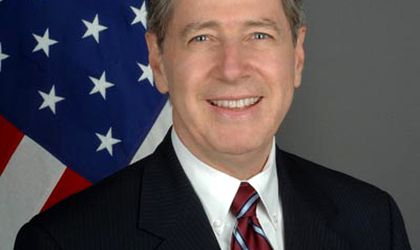 Mark Gitenstein, the former US ambassador in Romania, has been sworn in as a member of the board of nominees of the EUR 3.5 billion Property Fund (FP) with a whopping 99 percent majority of the votes cast during last week’s shareholders’ meeting.

One day prior to the shareholders’ vote, Gitenstein became interim board member following the resignation of Cristian Busu, a former counselor of ex-PM Emil Boc.Sorin Mindrutescu, CEO of Oracle Romania, got a fresh three-year mandate on the same board.

In December, Gitenstein, a lawyer by profession, completed his mandate of more than three years as chief of mission at the US Embassy in Bucharest. He was proposed by FP shareholder Emerging Markets Country Fund as board member.

The largest shareholders in the FP promoted representatives to the board of nominees. The five board members oversee the activity of Franklin Templeton, the FP’s administrator.

US-based hedge fund Elliott Associates, which is the biggest shareholder with a 14.95 percent stake, is represented by Steven van Groningen, president and CEO of Raiffeisen Bank Romania, and Piotr Rymaszewski, general manager and fund manager of Warsaw-listed company Octava NFI.

Asset manager City of London, with 9.7 percent of FP shares, is represented by Julian Rupert Francis Healy, who is a member of the Institute of Chartered Accountants in England and Wales.

Mark Mobius, executive chairman of Templeton Emerging Markets Group, commented that having Gitenstien as a board member will help the FP, although some shareholders were unhappy with the outcome of the vote.

“FP shareholders need to understand that Gitenstein will be their best friend, because he has the capacity to understand more about the shareholders’ rights and will be able to reach the highest level of government to ask for reform,” said Mobius.

Pushing for reform is one of the main priorities of the FP fund manager, given that it holds minority stakes in 67 companies, most of which are state-owned.

Shareholders have voted to extend the term for the secondary listing of the FP on the Warsaw Stock Exchange until December 2013 This transaction requires the linking of the Bucharest and Warsaw depositaries, something that has not yet happened.
Greg Konieczny, FP fund manager, expressed hope that the newly set up Financial Supervision Authority (FSA) would have a “better understanding” of the positive effects of this transaction for the market.

The 17 members of the FSA will regulate the insurance and private pensions industry, as well as the capital markets.