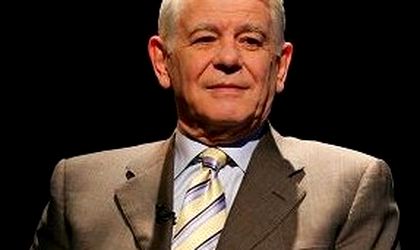 Ponta accused the incumbent president and his presidential challenger Klaus Iohannis of having put “inadmissible and unacceptable pressure” on the Foreign Ministry, which was aimed at challenging the results of this Sunday’s vote, notes Agerpres newswire.

In a press conference on November 10, Melescanu stressed his main goal is to ensure the voting right for all Romanians and said his first discussion will be with the Central Election Bureau (BEC) to this effect.

After a visit to BEC, Melescanu declared that in the current legislation, it can’t be opened new polling stations for the second tour of elections. “If there will be changing options, then we can talk. If not, we will concentrate on the measurements that regard making voting process going smoothly”, added Melescanu.

Teodor Melescanu was an independent candidate for these presidential elections, who is a career diplomat and resigned as head of the Foreign Intelligence Service (SIE) a day before announcing he was running for president. He holds a PhD in law from Geneva University.

Previous week, Former Intelligence chief Teodor Melescanu has announced his support for the incumbent prime-minister. Victor Ponta said on Tuesday that the former presidential candidate will be offered a position as presidential counselor on matters of security. “I’ve discussed the matter with mr. Melescanu and he will be part of my presidential team, as a counselor on matters of national security in the position currently filled by Mr. Fota, I believe”, Victor Ponta stated.