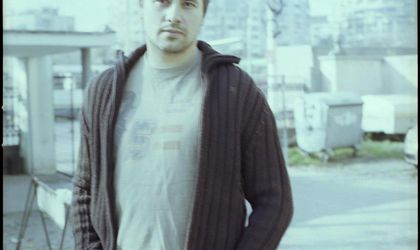 Radu Jude, the Romanian director who is present at this year’s Directors’ Fortnight (Quinzaine des Réalisateurs) section of the Cannes International Film Festival, is among the five film directors commissioned by the Art for Children project to publically debut one-minute films tackling the theme of abandoned children.

Conceived as a series of cultural events that will culminate in an art auction, the project Art for Children brings together for the first time the most important contemporary Romanian artists to support the cause of the country’s disadvantaged children, with the support of UNICEF and the National Bank of Romania, as well as Artmark.

“The idea for the inaugural edition of Art For Children was to commission five Romanian filmmakers to each produce a one-minute film on the theme of childhood and abandonment. Filmmakers were given information about the status of children in Romania as well as a series of tagwords; abandonment, hope, home, family, support, education and love. The films had to be exactly 60 seconds in length and made on a micro budget of EUR 1,000,” said John Ketchum, executive director of the Filminute festival.

“I don’t think many things can be said in a one-minute film, but something can nonetheless be shown. With this in mind, I aimed to show the abandoned children – at the time of the filming – in a Bucharest maternity ward. As a sort of proof. Because although there is a lot of talk about this, we hardly see anything about it,” said Jude.

Alongside Jude, best known locally for his award-winning shorts and feature films, whose Cannes entry this year is It Can Pass Through The Wall, the filmmakers commissioned for the project are Anca Damian, an award-winning director best known for Crulic: The Path Beyond; Catalin Leescu, a prolific filmmaker and editor, and four-times shortlisted director at Filminute; Bodgan Dumitrescu, a director at PRO TV and a director/producer of five shorts, including two at Filminute; and Olivia Caciuleanu, known for After Mathematics (2011).

Initiated by Princess Marina Sturdza, Art for Children is a two-year event in which Romanian artists are encouraged to create and donate artworks for disadvantaged children, thereby raising funds for long-term programs. The project will support the most important child protection, education and vocational programs, but will also contribute to projects to prevent the early institutionalization of children, plus training and monitoring cases.

Official statistics show that in 2013, 1,449 newborn children were abandoned in maternity wards across the country. Romania has almost 8,500 under-aged mothers and 60,000 children are in institutions.

WHEN: The films will be shown on May 8, at 18.30, at the Bucharest Central University Library.