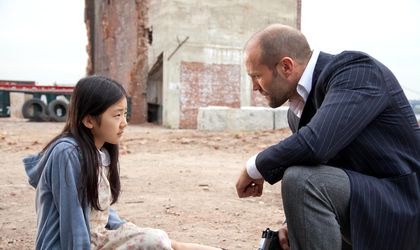 One of those facts that sometimes come up in the news that prove that we are truly going to hell in a handcart is this: films starring Jason Statham have taken a billion dollars at the box office. What a frightening comment on our values.

No doubt set to dump more piles of cash onto the heap is action flick Safe, in which Jason portrays a philosophy professor with self-esteem issues… okay, you got me. He actually plays a former NYPD cop turned cage fighter. But this Raging Bull of our times is robbed of everything he has in revenge by a violent gambling syndicate after he fails to fix a fight as agreed and is now living rough on the mean streets of New York.

Meanwhile, Chinese Triads have kidnapped an 11-year-old Chinese math prodigy (no racial stereotyping there) so she can remember safe (take note) codes without the Triads having to risk writing them down. But Russian gangsters are trying to kidnap her too to get the codes for themselves. And corrupt NYPD cops are also trying to get hold of the poor kid, to prevent a turf war that will create problems for the mayor who’s paying them off. Or something.

And we know that Jason is great because, deploying an accent that’s Brooklyn meets Basildon, he shoots, punches and chops those shifty Easterners into kingdom come to try and protect the 11-year-old Chinese math prodigy.

And important plot points are also repeated two or three times to make sure they don’t get past the audience. Example: gangster who has just killed Jason Statham’s wife and is planning to frame him for the murder: “You killed your wife. I didn’t kill her. You killed her.” Okay, thank you screenwriter. We understand the point you are trying to make. We may have helped Jason Statham make a billion dollars for big studios but we’re not entirely brainless.

So, we’ve got dozens if not hundreds of brutal murders, a plotline that a child – and not necessarily an 11-year-old Chinese math genius, a normal child – could predict and Jason playing the same role he’s played in every single film he’s ever made. And, for more highbrow viewers open to subtleties, we have… a pun! Because the 11-year-old Chinese math genius knows the numbers to a… safe… and Jason is trying to keep her… safe. Ta da!

Does it work as an action film? It works. It’s dumb but it’s slick and entertaining. And on rolls the Statham-mobile to its second billion.