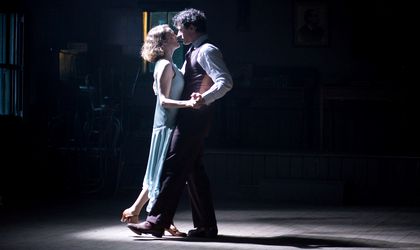 1930s Ireland, and a prodigal son is making his way home after a decade’s absence, spent working in the US. Charismatic and handsome, Jimmy Gralton (Barry Ward) is a legend in County Leitrim, largely for the hall he once set up – a community center where open-minded folk would gather to dance, play music and discuss literature and ideas.

With Jimmy’s departure, the hall closed – much to the relief of the local Catholic worthies, who objected to the notion of members of their flock having fun and thinking for themselves when they should be sitting in church listening to turgid sermons about what terrible sinners they all are.

But the local clergymen are not the only people that Jimmy upset. A radical republican activist with communist sympathies, he had emigrated to New York ten years earlier to avoid arrest (leaving a sweetheart, played by Simone Kirby). Now back leading the townsfolk in support of the poor and oppressed against the local fat cat landowners, Jimmy’s rabblerousing is riling the local authorities once again.

Directing is Ken Loach, who’s nearly as much of a socialist firebrand as his hero, so expect the politics to be laid on heavily. This can be troublesome at times in the modern, international context: the Irish Republic Army (IRA, a terrorist group that sought a united Ireland) is referred to sympathetically, which will jar with many viewers, while Romanian audiences may take exception to the rose-tinted view of communism.

Loach doesn’t much go in for nuance: rich landowners, police and their sympathizers = bad; poor, oppressed and left-wing = good (though one of the film’s antagonists is shown to have some redeeming qualities as the story unfolds).

But setting aside the politics, Jimmy’s Hall is a solidly enjoyable and uplifting drama, conventional in its narrative but well done, warm and rewarding. Whatever its socialist proclivities, the value the film puts on the arts, study, free spiritedness, speech and thought, and community solidarity, and its rejection of dreary dogma and conformity is a universal message.

Barry Ward is perfect as Loach’s twinkly-eyed leading man, bringing the right blend of rugged charm and good looks, humility and magnetism to the role of Gralton, a real-life communist leader. The love interest subplot is handled well with Kirby’s homely Oonagh adding a romantic poignancy to the sacrifices Jimmy is forced to make for his principles, without collapsing into sentiment.

The rest of the case provides colorful support, particularly Jim Norton as an embittered priest and Aileen Henry (incredibly and impressively in her first acting role) as Jimmy’s weary but canny mother.

Based as it is on real events and people, the film can be forgiven for its lack of surprises. Whatever your thoughts on Loach’s political vision, Jimmy’s Hall – said to be the director’s last film – is a big-hearted and impassioned cry for freedom, open-mindedness and self-expression, one that it’s hard to reject.

On at: Hollywood Multiplex, Cinemateca Union