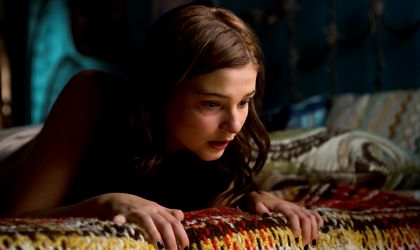 Things that go bump in the night get pretty creepy in this effective third installment in the Insidious series. It’s a prequel to its forerunners, but that shouldn’t deter newcomers: the movie works fine as a standalone piece. The only group who should be deterred is the easily rattled, as there are so many jumpy moments that a good portion of your popcorn is likely to end up on the cinema floor.

Bereaved teenager Quinn Brenner (Stefanie Scott) turns up at the house of retired psychic Elise Rainier (Lin Shaye), asking for help to contact her recently deceased mother. After a spooky and abortive séance session, Elise warns her off further attempts to reach her mom, with the ominous admonition, “You call out to one of the dead, all of them can hear you.”

So obviously after this fright Quinn goes straight home and sets about trying to commune with the spirit world. What did Elise just tell you, Quinn? What did she tell you? Sigh.

Anyway, soon the reckless teen is getting sinister apparitions as an evil spirit begins to stalk her. A clever plot twist then immobilizes Quinn, ramping up the tension as the definitely unfriendly ghost closes in on his stricken prey, who can’t even do that horror movie thing of running really fast as the monster follows at a slow, menacing walk, yet still manages to catch up.

So it falls to the rest of the Brenner family, Elise the psychic and a couple of geeky ghoul hunters, the latter providing much needed light relief, to stop the demon and save Quinn.

Even aside from the fact that this is the third in a franchise, Insidious: Chapter 3 doesn’t do anything original. Many of its scares and shocks are fairly predictable. But somehow this doesn’t lessen the impact, and the tension never slackens in the frightening bits.

But while the supernatural sections are more than serviceable, the movie is made richer by its comedy and its emotional core. Ghost hunters Tucker and Specs (Angus Sampson and the film’s director Leigh Whannell) provide techie banter and laughs (think the pedantry of The Simpsons’ Comic Book Guy mixed with the quirks of Edgar and Alan Frog from The Lost Boys) without which the horror and suspense would become too oppressive.

And the depictions of the Brenner family – stressed out dad Sean (Dermot Mulroney) struggling with his juggling balls of work and family since being widowed and tedious younger brother Alex (Tate Berney) – and their quirky neighbors – Hispanic hottie Hector (Ashton Moio) who has the hots for Quinn, and an elderly African-American couple who may have some connection to the haunting – give texture to the characterization, which is often overlooked in this type of movie in the pursuit of thrills and chills.

It’s all well done enough that Insidious virgins might be tempted to check out the previous two films. And while it’s not distinct enough to remain long in the memory, the film will keep audiences on edge for 97 enjoyably nerve-wracking minutes.