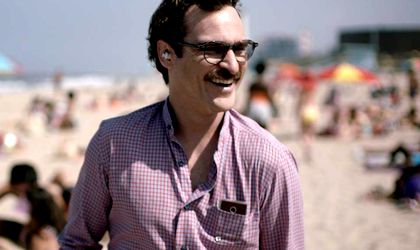 It’s a common sight these days: a group of people around a table together, each with their nose buried in their smartphone, totally ignoring the others. This obsession with technology and overreliance on gadgets, this withdrawal from the real world to live life online – all this is the premise for Spike Jonze’s memorable and melancholy love story for our times.

LA in a not too distant future. Lonely Theodore Twombly (Joaquin Phoenix) is looking for love. Real-world relationships are not going too well since the breakdown of his marriage to childhood sweetheart Catherine (Rooney Mara), and his efforts to find gratification in anonymous phone sex are proving equally unrewarding.

Theodore’s only human warmth comes from his college ex Amy (Amy Adams), herself in a bad marriage, and a geeky pal at the office where Theodore works composing “beautifully handwritten letters” to order online, a wry throwback to the pre-digital age.

But that’s until he connects with Samantha (voiced by Scarlett Johansson), his new operating system, part of a generation of highly advanced and personalized OSes that as well as serving as a sort of virtual secretary also appear capable of human states and emotions, such as friendship, wonder and love.

The early part of the film is concerned with depicting the techno-world of the future. Jonze taps into several modern trends – the rise of single-person households, urban alienation, the shift of socializing online, the unstoppable march and increasing sophistication of connectivity. Although the film is categorized as sci-fi, its science fiction is close to science fact, with Theodore’s imagined LA little different from today’s Hong Kong, say, where the smartphone craze has taken greater hold.

The story then moves on to Theodore and Samantha’s developing “relationship”. The creator falling in love with his (it is usually a man) creation (or a similar “unreal” woman) is a timeless theme, running from the Pygmalion myth to movies such as Mannequin (1987) and Ruby Sparks (2012). It invites us to question the nature of love: many liaisons begin online today, and long-distance relationships are often conducted largely in the virtual realm – is Theodore and Samantha’s connection so different?

Known mainly for his breakthrough role as the treacherous and sadistic emperor in Gladiator, Phoenix could not be more different as the shy and lonely writer, and delivers an impressive, film-carrying performance (even if Theodore is a bit too likeable to be fully believable).

Jonze advances the proceedings leisurely: the movie sags slightly towards the end and could perhaps have been a quarter of an hour shorter than its two hour plus runtime. But that’s a mere quibble – overall, Her is a pertinent and thought-provoking tale from the digital age.