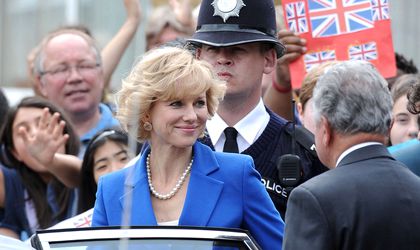 Described as both the most photographed and the most famous woman in the world, Princess Diana’s face, voice and story are familiar to millions, if not billions. This makes Oliver Hirschbiegel’s new biopic a daunting challenge. For while there is plenty of material on which the filmmakers and lead actor Naomi Watts could base the character’s clothes, hair, voice and mannerisms, what Diana did and said behind closed doors remains mostly a mystery. The movie must therefore take enormous liberties with its script, the effect of which is sometimes moving but at other times cringeworthy.

Not that Diana herself was not given to the odd cringeworthy utterance (example: “I’d like to be a queen of people’s hearts”). But imagining how she might have flirted with the dashing heart surgeon who caught her newly single eye a couple of years before she died (example: “Hospitals fascinate me. When I visit hospitals, I get excited”) is highly presumptuous, especially as it involves contemporary figures, one recently deceased and one still alive – Hasnat Khan, the doctor whose romance with Diana, following her divorce from Prince Charles, is the main business of this film.

Boy meets girl, boy loses girl, girl dies in a Paris car crash that some still think was state-sanctioned is not your average romantic drama (with apologies for the spoiler if you’ve been living on the moon). But what many of Diana’s fans loved about her – at a time when the British royal family’s popularity was low – was that she often

behaved like a “normal person”, gamely competing in the mothers’ race at her sons’ sports day, taking them on theme park rides and generally engaging with the proles, unlike her aloof husband.

And the “normal people in abnormal circumstances” is one aspect of the film that works best, as when Diana thinks she has successfully smuggled Hasnat into KensingtonPalace in the boot of her car, only for her protection officers to deduce the surgeon’s presence from the change in suspension. Everyday situations, such as a first date, are rendered highly complex by Diana’s fame and position. This eventually becomes the death knell for their relationship, as her private beau could not cope with life in his girlfriend’s goldfish bowl. The film then briefly traces her subsequent relationship with Dodi Fayed and their notorious and tragic demise.

What works less well is the often clunking script, with its somewhat stilted and unrealistic dialogue between the lovers. The film is a reminder of the important humanitarian work that Diana did – notably her campaign against landmines – but scenes such as the one where the princess orders her royal convoy to a halt so she can jump out and embrace a grieving Balkan mother at her son’s grave are rather cloying.

Critics have raced to pan this movie, with some justification. But for all its jarring liberties, it remains a touching portrait of a doomed romance and doomed woman.