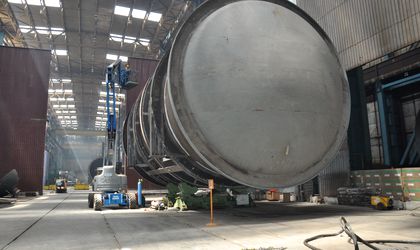 FECNE Nuclear Components, a Bucharest-based plant controlled by Italy’s Walter Tosto Group, will supply three separators to Russia’s gas producer Gazprom to be fitted in the world’s biggest gas compression station that is under construction in Russia in a deal worth EUR 1.8 million.

FECNE said the deal has a “strategic importance” that will help it become a global player in the industrial equipments sector.

Gazprom aims to start operations on the CS Russkaya complex in the second quarter of 2014 and expects FECNE’s separators to be delivered by February 2014.

“The project comprises five separators for the installations in Anapa (Russia). Two of them will be made by OMZ, while FECNE will deliver three, as it was considered the only global trustworthy partner to participate in such a complex project that has a very tight deadline,” said Tosto.

Gazprom will invest EUR 100 million in the Anapa-based installation that will have seven gas pumping units of 32MW, as part of the wider project that has a capacity of 448MW. The CS Russkaya is included in the South Stream pipeline project developed by a consortium including Gazprom.

Walter Tosto, a component maker for the energy sector, acquired FECNE in 2012 and invested EUR 23 million to relaunch it. FECNE formerly produced components for the nuclear industry.

The Italian group aims to increase the turnover by 10 percent to EUR 100 million this year, following its Romanian acquisition. Walter Tosto has 550 employees, out of which 100 are in Romania. The company plans to make a five-year investment of EUR 30 million in Romania.