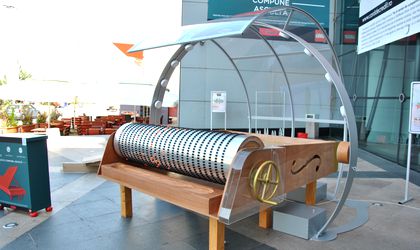 An innovative production, under the shape of a music box of impressive dimensions was exposed for the first time at Baneasa Shopping City, with the occasion of George Enescu International Festival, with the purpose of encouraging the public to discover the work of the great composer, especially the children.

The innovative mechanism is a hybrid between a mechanical music box and a digital one and is an innovation in terms of concept and production: outside it looks like a classical music box, with a handle that needs manual activation to function, while the sounds are generated electrically. The layers have vibration sensors and let out notes when they are touched by the protuberances on the main rotating cylinder, with each vibration generating a different tone. The reproduced sounds are based on the Romanian Rhapsody score.

In order to maintain the ludic and interactive character of the mechanism, the protuberances on the cylinder consist on 2,500 Lego pieces of different colors that children and adults are invited to arrange following a pre-established algorithm.

“The project appeared from our desire to bring mall’s visitors closer to George Enescu’s music also this year, in an unconventional manner to allow people to interact with composer’s work. This is how the biggest interactive musical box appeared, a modern interpretation of the classical version, but which fits the cosmopolitan set up from Baneasa Shopping City. We were open to the proposal from the first moment and we are happy music came to live now in the mall, with the help of our visitors,” said Alexandru Bogdan, marketing director at Baneasa Shopping City.

The music box was produced at the initiative of Baneassa Shopping City, together with FCB Bucharest as part of the project Creative Bucharest, organized during George Enescu Festival.

“We want to generate interest for music in general and for George Enescu’s opera in particular, both among parents and children and to encourage all together to listen and interact with good music. And because we learn the best when we play, we want to encourage the children to get in contact with the music through elements they are familiar with: Lego pieces. As far as we know, such an interactive construction is a first at international level,” added Claudiu Dobrita, creative director of FCB Bucharest.

The campaign includes, besides the music box, also outdoor and signaling executions in the mall.

Also involved in the campaign were In Touch Media (soft) and Multimedia Proactive (production of the box).