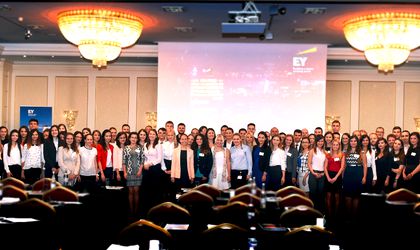 EY Romania hired 101 graduates in September 2015, the highest number in a single year recruited by the company so far and 20 percent more than last year, a company statement reads.

This brings the EY Romania team to a total of655 professionals. About 60 percent of new employees will join the financial audit department, and the rest will be part of the tax and legal, transaction and business assistance departments.

Over 1,600 students from Bucharest, Cluj-Napoca, Iasi, Timisoara and Oradea have applied for a job at EY this spring. The recruitment campaign this year was one of the most complex undertaken by the company in Romania and included online applications, video interviews, perseverance assessment tests, interviews with EY managers, and two competitions for selection – EY Tax Academy and EY Mega Days.

“The labour market in Romania confronts us with challenges that 5-10 years ago were not so visible. For example, the number of students has decreased year to year, reaching almost half the level in 2008. Academic programs’ calibration to market needs is very difficult, and the pace of change in economy and society is increasingly rapid. We have an exceptional human capital in Romania that does not achieve its potential on these grounds. We have talented young people who need guidance and support to acquire the skills needed in the market now.

According to studies on most desirable employers published by Catalyst and Trendence in late July, EY Romania is currently the most desirable employer in consulting in the country and the most wanted employer in the Big4. It is also in the top preferences by young people with potential and MSc students, being perceived as the company with the most attractive and innovative training programs. Overall, EY Romania ranks 7 in the Top 10 companies in which youth wants to work, according to Trendence.

According to the Catalyst study, among the criteria by which respondents choose their employer are the package of wages and benefits offered by the company followed by the company’s reputation for candidates with an economic profile. In addition, the survey results show respondents have a growing interest in other benefits provided by employers, such as health insurance.

EY is one of the largest professional services firms globally, with 210,000 employees in over 700 offices in 150 countries and a turnover of some USD 27.4 billion in 2014. EY became active in Romania in 1992 and has offices in Bucharest, Cluj-Napoca, Timisoara and Iasi. Over 650 employees in Romania and Moldova provide seamless assurance, tax, transaction and advisory services business for multinational and local companies.