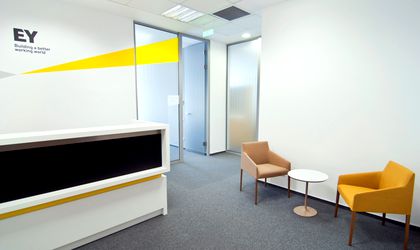 EY Romania’s Cluj-Napoca team has moved to a new space in The Office building, which better suits the growing team needs, which has now reached a number of 20, a company statement announces.

“In 2015 we celebrate 7 years since we opened our office in Cluj-Napoca to provide services to rapidly growing companies in the area. Contrary to general trends, the business environment in Cluj has increased remarkably during these difficult years, marked by the financial crisis. The region has grown rapidly into the second economic pole of Romania, after the capital. And we at EY Cluj, grew together with the businesses we serve,” says Bogdan Ion, country managing partner, EY Romania.

The new space, built on the concept of Workplace of the Future, aims at increasing collaboration through open spaces, while allowing for flexibility in schedules and meeting spaces.